Elizabeth Warren On Unclear Warpath To Impeach Trump. The Only Question Is How? 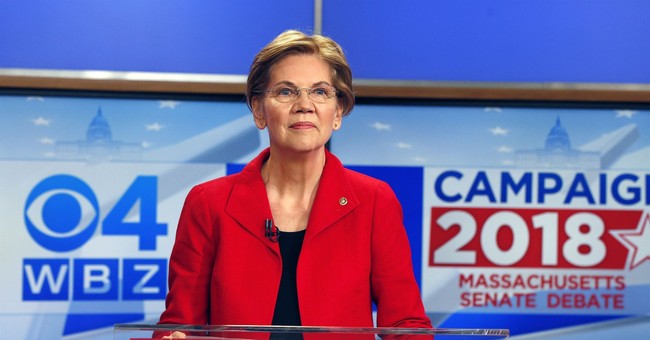 Sen. Elizabeth Warren (D-MA) called upon her Democratic colleagues in the House of Representatives to "initiate impeachment proceedings" of President Donald J. Trump in the wake of the release of the redacted Mueller report, but it seems apparent the majority of Democrats in Congress actually do not think this is a viable idea.

As speculated by the Daily Wire Sen. Warren issued a series of tweets laying out her framework for why President Trump should be removed from office, perhaps in an effort to boost her relevancy in the 2020 Democratic Primary.

via the Daily Wire:

On Friday, Senator Elizabeth Warren (D-MA) desperately trying to gain attention for her failing campaign for the Democratic presidential nomination, which she launched before everyone else but remains lagging far behind other candidates, even in her own state, called for the House of Representatives to impeach President Trump.

The piece goes onto list her Twitter monologue, pleading with the Democratic electorate and their representatives to listen to her case.

The Mueller report lays out facts showing that a hostile foreign government attacked our 2016 election to help Donald Trump and Donald Trump welcomed that help. Once elected, Donald Trump obstructed the investigation into that attack. Mueller put the next step in the hands of Congress: “Congress has authority to prohibit a President’s corrupt use of his authority in order to protect the integrity of the administration of justice.

The correct process for exercising that authority is impeachment. To ignore a President’s repeated efforts to obstruct an investigation into his own disloyal behavior would inflict great and lasting damage on this country, and it would suggest that both the current and future Presidents would be free to abuse their power in similar ways.

The severity of this misconduct demands that elected officials in both parties set aside political considerations and do their constitutional duty. That means the House should initiate impeachment proceedings against the President of the United States.

But, it seems like most of those in Congress reject this plan wholeheartedly because it would spell political ruin for their party and cause them to lose the House as well as re-elect the president.

After interviews with 15 lawmakers Thursday, it’s clear Democrats think the report is severely damaging to the president, with substantial evidence that he attempted to derail the Russia probe. But it’s still not enough to pull the trigger on the most consequential — and politically risky — action Democrats could take in their new majority: trying to forcibly eject Trump from office.

“Election time is when you beat Trump,” said Rep. Raúl Grijalva (D-Ariz.), a senior member of the party’s progressive wing who was an early supporter of impeachment efforts in the previous Congress.

Yet, while Speaker Pelosi says a conference call will occur Monday to discuss this "grave matter" of impeachment, others are not sure she truly wants to go through with it.

“I think that Speaker Pelosi doesn’t think it’s worth going forward politically when there will not be a conviction. ... For a lot of people in swing districts and all, it’s probably easier for them to take that position,” said Rep. Steve Cohen (D-Tenn.), who previously introduced articles of impeachment against Trump.

“I don’t know that we’d have a majority, anywhere near a majority, willing to stand up and oppose the speaker and take a position that could be adverse to maintaining the House,” he added.

Other progressives such as Rep. Alexandria Ocasio-Cortez and Norma Torres believe the party should move forward with impeachment.  But, even House Judiciary committee Chairman Jerry Nadler told the press, "It’s too early to talk about that,” Nadler told reporters Thursday when asked about impeachment. “That’s one possibility. There are others.”

How exactly will Sen. Warren convince her Democrats in Congress to impeach Trump? That remains unclear. More importantly, how is she going to convince the 58% of the country who believe Democrats should move on from the Russia probe altogether that her idea is worthwhile? Who knows.