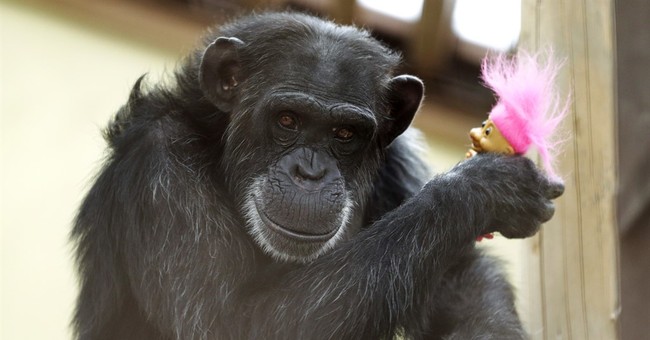 We have a real-life "Planet of the Apes" scenario in Northern Ireland as zookeepers say a troop of chimpanzees used fallen branches to construct a ladder for a daring escape last week.

The Associated Press reports "Zookeeper Alyn Cairns said trees in the chimps’ enclosure had been weakened by recent storms, allowing the animals to break them and fashion a ladder to escape. He told the BBC 'they’re intelligent primates and know they’re not supposed to be out of their enclosure, so got back in themselves.'"

The video provided by The Guardian was taken by locals visiting the zoo.  One attendee told the British paper that she was terrified but chose to remain calm.

“I was petrified, obviously, having the kids, and I tried not to show fear but inside I was a bit like: what happens if it attacks us or tries to take the kids or runs over?” Danielle Monoghan told the media.

“But we just had to stay calm. It may have been a different story if it had been aggressive but it absolutely wasn’t. It made us feel at ease. We just walked past it and it was absolutely grand," she added.

Chimpanzees, members of the "great apes" alongside gorillas and orangutans, are considered to be the second smartest primate on the planet.  According to National Geographic, The animals have been known to communicate with each other, use tools for various tasks, and even share 98.5% of the same DNA as human beings.

Considering this is the second time this year that a creature has escaped from the Belfast Zoo, we can only hope the animals are being treated better than they were in the 2011 reboot of the "Planet of the Apes" franchise, "Rise of the Planet of the Apes."