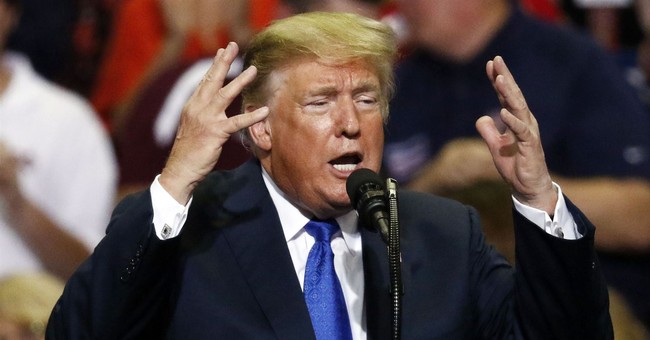 In Cinncinatti, President Donald J. Trump rankled the mainstream media yet again this weekend with seemingly complimentary comments regarding Confederate General Robert E. Lee as a "great" military leader. Yet, a full tale of the tape reveals that the commander-in-chief only made such comments as a preface to heralding Union General and United States President Ulysses S. Grant as a truly exceptional leader who was finally able to help President Abraham Lincoln defeat the South.

First, NBC News tweeted an edited clip without context that made it appear as if President Donald J. Trump were discussing only Robert E. Lee.

In the 52 second video, the president says the following:

And then the clip ends. Whoever was working the NBC News' Friday evening newsdesk shift thought it newsworthy to tweet out that quote. Did the NBC News weekend editor think the point of the President's remarks were to praise Robert E. Lee? Or was he purposefully trying to take President Trump out of context? Well, in order to decipher his or her reasoning, one must read President Trump's comments in this part of his rally in full.

CNN's Manu Raju tweeted a complete copy of the relevant portion of his remarks. The full text shows that President Trump was referring to Lee as a "great" general in terms of his ability to win battles (which is true) and that the "incredible" description was meant for Ulysses S. Grant. Trump goes on to recount how Grant was an alcoholic (also true) but able to defeat Lee, who at one point was asked by Lincoln to lead the Union army. In order to show how impressive Grant's accomplishments were, President Trump does the following: 1) recounts Lee's initial success for the South and 2) discusses the so-called experts at the time's failure to stop this formidable opponent.

Here are his comments: pic.twitter.com/8le6IRqgPO

Even though the president was clearly bragging about Ohio-native Grant's heroic victory over the South, liberals on Twitter and in the media impulsively knee-jerk reacted to hearing a Confederate general described as "great." It is as if the liberals heard the word "great" and immediately assumed President Trump meant the Confederacy was "great" and not that Lee simply had a "great" military mind.

That nuance did not stop the Washington Post from running headlines such as, "Trump calls on blacks to ‘honor’ Republicans with votes, then praises Confederate general Robert E. Lee." Liberal twitter commenters such as Brian Krassenstein ignored the full context of his remarks completely and declared, "Trump is such a 'stable genius' that he goes up to Ohio, a Northern Union State during the Civil War, and praises Robert E. Lee, while calling Ulysses S. Grant a 'drunk'. I guess he's pandering to the other 'stable geniuses' who live in Ohio and fly Confederate Flags with pride."

Conservatives, of course, pointed out President Trump was entirely accurate in his assertions, was not praising the Confederacy, and was not insulting Grant.

I cannot even believe the dishonesty from the media surrounding Trump saying Robert E. Lee was a good General. It was a wind-up to praise Grant for defeating him.

On top of that, Lee was objectively one of the best military minds of the age

Robert E Lee was, in fact, a great general. To dispute that fact is simply idiotic. You don't have to be a Confederate sympathizer to recognize a basic historical reality.

Audience doesn't cheer Robert E. Lee.
They cheer when @realDonaldTrump mentions General Grant.
Because he's in Ohio, and Grant was from Ohio.
This is pathetically stupid media-invented controversy. https://t.co/U5OPhyvVaP

As an optimist, I'd like to believe that those who are taking President Trump out-of-context here really are simply too misinformed to understand the point of his comments at last night's rally. As somebody with common sense, it is painfully obvious that for a liberal in the media or on Twitter battling against Trump, if the commander-in-chief can be painted as a bad guy then the truth be damned. The left will purposefully put out fake news to divide the country.