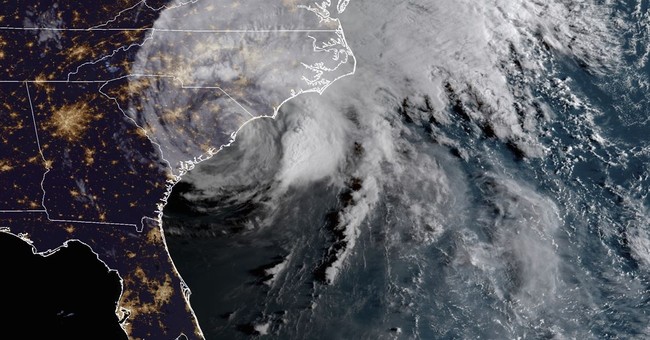 To be clear, Hurricane Florence has devastated the Carolinas with property damages, power outages, and has killed at least seven people so far. But, the storm also provided a hilarious piece of television as a weatherman attempted to show just how strong the winds currently were despite the fact that two men casually strolled by in the background with no difficulty at all.

On Friday, Weather Channel reporter Mike Siedel warned viewers that the wind speeds were "about as nasty as it’s been" as he "struggled" to maintain his balance. However, two men walking casually by in gym shorts and hoodies suddenly appear 25 yards away in the background with no trouble at all.

So dramatic! Dude from the weather channel bracing for his life, as 2 dudes just stroll past. #HurricaneFlorence pic.twitter.com/8FRyM4NLbL

Even funnier about the dramatically staged scene is the fact that Siedel was leaning with the wind and not into the wind, which is precisely the opposite of what you do in order to maintain balance. The Weather Channel responded to criticism saying that exhaustion and slippery conditions made it difficult for their reporter to stand.

"It’s important to note that the two individuals in the background are walking on concrete, and Mike Seidel is trying to maintain his footing on wet grass, after reporting on-air until 1:00 a.m. ET this morning and is undoubtedly exhausted,” according to the channel.

Of course, reporting in extreme conditions is difficult and often necessary to warn the public just how dangerous natural disasters can be. But, sometimes it provides hilarious moments as well. As a flashback, here is perhaps the greatest scene in weather-related TV. A jogger in the middle of a snowstorm tells the media how the snow is actually "perfect texture" for running because it provides perfect padding for each stride. She then promptly wipes out.