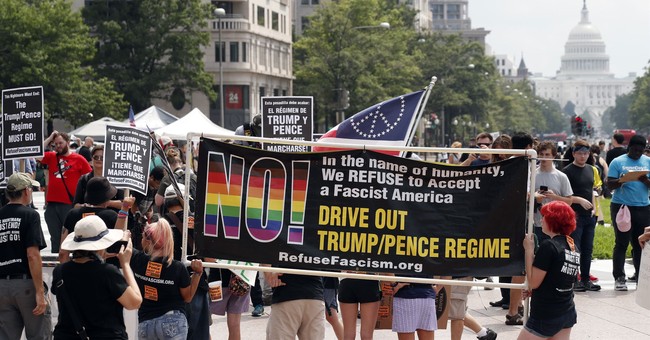 Around two dozen hate-mongering, white nationalists traveled to Washington, DC today in an attempt to gain relevance, media attention, and spout nonsensical theories at some event they called a "Unite the Right 2" rally.  In turn, hundreds of far-left Antifa freaks counteracted the protest by haranguing President Trump, police, and the free press with threats of violence and uprising. By all accounts, it seems like this was the biggest waste of time for all involved and attended by people whose day would be better off spent cleaning their parents' basement or taking a shower.

As noted by NBC's Garrett Haake, a small group of white nationalists mosied down the streets of Washington, DC mumbling statements about a supposed supreme race.

This is the “Unite the Right”’rally crowd. All of them. pic.twitter.com/flgi9jqZQ2

On the opposite side of the spectrum, far-left counter protesters responded with asinine remarks of their own. These messages were not necessarily advocating love and peace. In fact, it seems like it was just the opposite. Haake also showed one large banner, saying, "It takes a bullet to bash fash."

Arriving on the scene: Antifa

That big sign reads “It takes a bullet to bash fash” pic.twitter.com/z0PFkN2sAv

The left also presented to the world the following lady who is revved up on the idea that Robert Mueller is not going to be able to take down President Trump. She worries that the president will "off" the man in charge of the special counsel investigation into Russian interference. The woman apparently is with a group known as RefuseFacism.org.

Counter protesters from https://t.co/cyp6X5CIJY gather in Freedom Plaza ahead of the Unite the Right 2 rally in Washington, D.C. pic.twitter.com/XpZgX6KAk4

Given the extremes of these two groups it should be noted, God forbid, that this event has the potential to turn into an absolute tragedy, even fatal as it did last year.  But, the real story should be how the mainstream media's coverage leading up to today wrongly predicted that the white nationalist crowd would be far bigger.

No small group of losers has received this much media attention since the Fyre Festival https://t.co/5AJ416tQsx

For an industry that by and large just praised social media for kicking off conspiracy theorist Alex Jones from their platforms, the mainstream liberal media has done nothing but give these twenty-something racist protesters coverage as if they were a legitimate group. It is pretty pathetic and obvious these racists get attention from mainstream media seeking ratings.

The Media wants ratings and the racist White Supremacists want attention and legitimacy. What they’re engaging in is a Symbiotic Relationship just like Sucker Fish who live on Sharks. 24/7 Coverage is gross and only helps them, treat them like the tiny splinter group they are. https://t.co/66fDUS7mBe