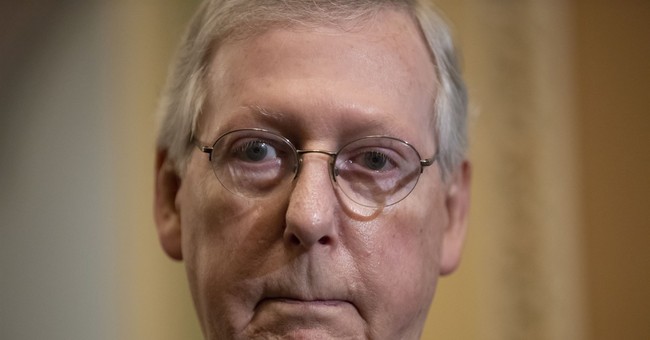 Kentucky Senator Mitch McConnell was harassed by liberals shouting at him yesterday as he came out of a restaurant but the senate majority leader, unlike his wife a few weeks ago, simply meandered his way to his vehicle and drove off.

The video, posted by Louisville Democratic Socialists of America, features five or six men and women shouting things such as, “Vote him out! Vote him out!” At one point, somebody yells, “We know where you live, Mitch!”

“Cocaine Mitch,” as he became affectionately known after failed GOP West Virginia candidate Don Blankenship gave him the moniker, looked as if he did not have a care in the world. The protesters also called him names such as “turtlehead” and asked “where are the children?” in reference to the illegal immigrants separated from their parents at the border. Sen. McConnell and his crew drove off, leaving the protesters standing there looking foolish.

The video can be seen here:

Left-wing activists harassed Mitch McConnell as he was leaving lunch on Saturday and threatened him: "We know where you live, b*tch!"pic.twitter.com/Y7bmjbamHo

The video is quite the juxtaposition to a similar style ambush protest a couple weeks. His wife, Transportation Secretary Elaine Chao, shot right back at protesters who yelled at her and her husband as they hopped in a car. Chao got right in the face of the protesters, pointing her finger and saying, "Leave my husband alone!" As one Twitter commenter put it, “It’s a good thing those guys had Elaine Chao’s bodyguard there to protect them from her.”

Several conservatives on Twitter jokingly pointed out that, despite Mitch McConnell's quiet persona, Cocaine Mitch is the wrong guy to mess with.

What these poor bastards don't realize is that Cocaine Mitch *wants* them to know where he lives. He's just waiting for them to walk into the ambush. https://t.co/ctPGSmBOs5

If these idiots keep bothering Cocaine Mitch, he will end up taking a few more SCOTUS seats from them. https://t.co/q21onhCaf2