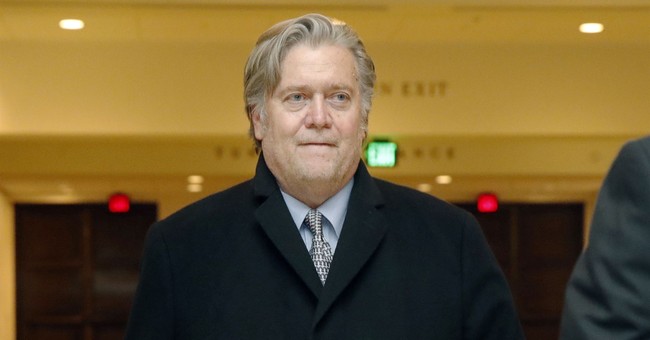 President Donald J. Trump's former campaign advisor and White House chief strategist, Steve Bannon, sat down with ABC News "This Week" today to defend himself and decisions made by President Trump against accusations of racism and other criticisms. While on the show, Bannon asserted that civil rights leader Rev. Martin Luther King, Jr. would be proud of this president's accomplishments for black and Hispanic families.

"Steve, how can it be a badge of honor to be called a racist?" Karl asked.

"OK, here's the thing. You walked into the same trap the BBC walked into and CNN walked into. Look at -- just don't take the clip, look at the lead-up to the clip. I was talking specifically about Donald Trump and his policies," Bannon replied.

"I said his economic...His economic nationalism doesn't care about your race, your religion, your ethnicity, your gender, your sexual preference. Here's what it cares about, that you're a citizen of the United States of America. We have all-time low unemployment among blacks in this country, a 20-year low among Hispanics. The black working class, Hispanic working class are now getting the benefits, OK, of border security and economic...By the way...The lead-in to that was saying when they can’t fight you on the facts, they’re going to call you racist," he added.

"When I first -- when I first took over the campaign...they said, oh Trump’s going to lose by 20 points, brought this mad bomber in, (inaudible) enemies on the way (ph) down. Hillary Clinton comes off the beach, off the Hamptons and she gives her identity politics. White nationalism, white racism. And I said at the time, sitting in the war room (ph) with the guys, I said hey, if she runs on that and we continue to press economic nationalism and jobs, OK, and bringing jobs back from -- from China, we’re going to run the tables on her and we did," Bannon said.

Bannon again stated that much of the media never explained the quote in full, and selectively edited his answer showing the part where he said that being called a racist should be a badge of honor.

FInally, Bannon added, "Martin Luther King...he would be proud of what Donald Trump has done for black and Hispanic working class, OK?"

"I think there are a lot of -- a lot of civil rights leaders that would adamantly disagree with you on that," the host responded.

During the interview, Bannon also stated that he is currently not speaking with the president but does communicate with him via media interviews. Part of the exchange can be watched below:

Steve Bannon says Dr. Martin Luther King Jr. "would be proud of what Donald Trump has done for black and Hispanic working class."@jonkarl: "I think there are a lot of civil rights leaders that would adamantly disagree with you on that." https://t.co/6HR67wo4uN pic.twitter.com/BYCo4gyAVh