ICYMI: More Republicans Than Democrats Pay Their Interns in Congress 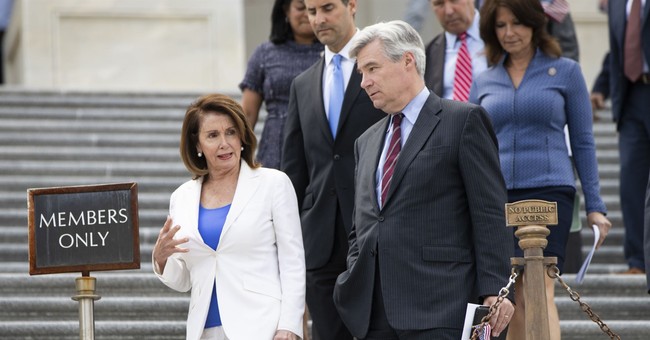 One might believe that elected Democrats in Congress would be more likely to pay their interns than their Republicans counterparts based on purported economic rhetoric alone. After all, the Democratic party is the self-proclaimed party of America's working class while Republicans are supposedly the party of the rich. However, despite their lofty campaign messaging, a recent studies Democrats are actually less likely than Republicans to pay their interns in both the Senate and the House of Representatives. This means that leftist politicians who bemoan alleged corporate greed and fight for a minimum wage once again refuse to practice what they preach.

This report actually came out in 2017 but is back into the news thanks to a Huffington Post article earlier this week. That piece highlighted the right's willingness to invest in interns and other college-aged groups. According to said Carlos Vera, the executive director of Pay Our Interns, Democrats simply believe that paid internships are not necessary.

"The Republicans are building an army, while the Democrats are still paying you in ‘making the world a better place.' I’ve had older people say to me, ‘Well, I did unpaid internships and I was fine.’ Then you ask them when that was and they say, ‘1972.’ You could work your way through college back then. That simply is not the case anymore," Vera told the Huffington Post.

The Huffington Post piece is well worth the read. It details conservative donors willingness to donate large amounts of money to organizations such as the Leadership Institute, Americans for Prosperity, and the Heritage Foundation with a focus on young adults. These groups then turn around and offer a multitude of options ranging from free housing, stipends, and paid internships.

Perhaps most enlightening is the story of "Nathan" a young Democrat who became disillusioned with his party's ideals after trouble finding meaningful work within the liberal movement.

"After he graduated from college, it took Nathan two years, three unpaid internships and six bartending and retail jobs before he got his first paid gig in progressive politics. His employer was a small, millennial-focused outreach nonprofit, and his job was to supervise four interns — young kids, fresh out of school, working the same day job/night job, 80-hour-a-week cycle he had just exited.

Nathan, who wouldn’t give his real name out of fear of retaliation, asked his boss if he could start paying the interns. “I didn’t think I was going to get them federal minimum wage — that’s impossible in Washington,” he said. “But at least they could get a stipend.”

His boss refused, without offering much of a case for why they couldn’t afford to pay them.

“It just wasn’t a conversation,” Nathan said. “I didn’t have the authority to push it because I was a low-level person.”

He felt complicit, and after a few months, he quit. He’s currently in grad school to become a teacher.

“I had a lot of hope that my party would not be slimy,” he said. “But that felt slimy."

For the record, Townhall pays our interns. They do a heck of a job.