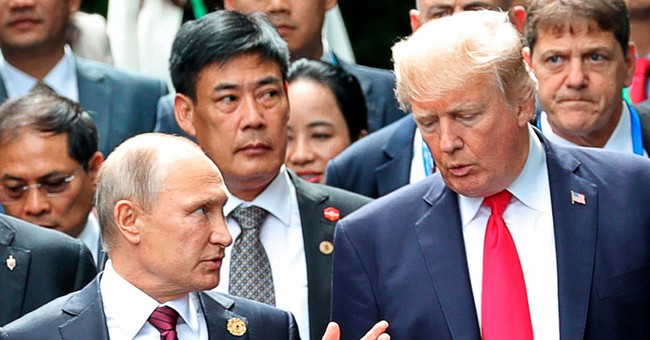 On Saturday, reports began flowing out of Syria that their own government allegedly had used chemical attacks on civilians which killed dozens of men, women, and children. It was unknown what the response from the United States would be, but today President Donald J. Trump made clear that he is blaming Russian President Vladimir Putin and the Iranian government for supporting "Animal Assad."

"Syrian opposition activists and rescuers said Sunday that a poison gas attack on a rebel-held town near the capital has killed at least 49 people, according to local estimates.

The allegations are denied by the Syrian government, with the US describing the reports as "horrifying".

A joint statement by the medical relief organisation Syrian American Medical Society (SAMS) and the civil defence service, which operates in rebel-held areas, said 49 people had died in the attack late on Saturday. Others put the toll at 150 or more.

Syrian state media denied government forces had launched any chemical attack and said rebels in the eastern Ghouta town of Douma were in a state of collapse and spreading false news.

The US State Department said the reports of mass casualties were "horrifying" and would demand an international response if confirmed, laying some of the blame with Russia."

Sorry please forgive me I have to share this photos. In case you didn’t know, this is happening in #Syria today, children gassed to death. #Douma pic.twitter.com/tMOsz1BPXp

.@DevinNunes on the chemical attack in Syria: “I haven’t been briefed on this yet… but obviously it’s very troubling.” pic.twitter.com/3mvuC74CMX

After these reports became public, the commander in chief took to twitter saying there will be a "big price to pay"  for those responsible.

"In August of 2013, a rebel-held suburb of Damascus was attacked with sarin gas — a nerve agent that causes lung muscle paralysis and results in death from suffocation.

The attack killed 1,400 men, women and children, and at the White House, officials asserted “with high confidence” that the government of Bashar al-Assad was responsible.

One year earlier, President Barack Obama had described Assad’s potential use of chemical weapons as “a red line” that would have “enormous consequences” and “change my calculus” on American military intervention in Syria’s civil war.

When Assad appeared to cross that line, Obama ordered the Pentagon to prepare to attack.

“Our finger was on the trigger,” Gen. Martin Dempsey, Chairman of the Joint Chiefs of Staff, tells veteran FRONTLINE correspondent Martin Smith in tomorrow’s new documentary, Obama at War. “We had everything in place and we were just waiting for instructions to proceed.”

But as FRONTLINE details in the below excerpt from Obama at War, the president had second thoughts.

“The president was looking for a way to not have to make good on the threat that he had made,” Col. Andrew Bacevich (Ret.), author of The Limits of Power, tells FRONTLINE. “I think because the president having drawn that red line realized that he had no appetite for direct military engagement in Syria.”

On that subject, President Trump asserted Syria could have ended long ago if President Obama followed through with his promise.