Sadly, President Trump Is Not the Inventor of Governor Brown's Latest Nickname 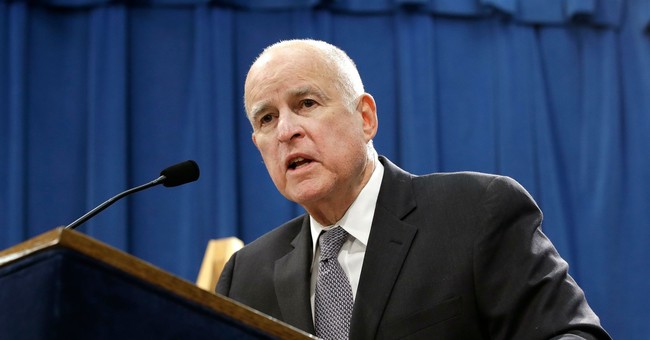 Earlier today on Twitter, President Donald J. Trump lambasted California Gov. Jerry Brown for his pardoning of five illegal aliens with criminal records. In typical Trumpian fashion, the commander in chief referred to Gov. Brown as “Moonbeam." Admittedly, this article's title is a bit misleading. That insult is actually a holdover from the 70s and from a very different era in politics. Nonetheless, the nickname remains a true gem and will certainly now be thrust back into the spotlight.

Governor Jerry “Moonbeam” Brown pardoned 5 criminal illegal aliens whose crimes include (1) Kidnapping and Robbery (2) Badly beating wife and threatening a crime with intent to terrorize (3) Dealing drugs. Is this really what the great people of California want? @FoxNews

According to the Sacramento Bee, these pardons will provide protection for these convicts from deportation.

The pardons don't automatically stop deportation proceedings, but eliminate the state convictions federal authorities based their deportation decisions on. That gives the men's lawyers strong legal arguments before immigration judges to try to prevent the deportations.

The background of this story President Trump is referring to should hardly be surprising. Gov. Brown has circumvented the Republican president nearly every chance he gets. Whether it is on illegal immigration or the environment, the governor has suddenly embraces states' rights and separation of federal powers.

So, where exactly does “Moonbeam” come from?

The line stems from Gov. Brown’s plan for a satellite over California in 1976 when he was running for governor at the time. The idea was outrageous due to limitations in technology and cost. Still, the idea is ludicrous considering the extraordinary amount of debt California is in. But, back then a Chicago journalist decided to call Brown "Gov. Moonbeam" to highlight his far out there ideas.

"In 1976, a Chicago newspaper columnist wrote that Jerry Brown would get "the moonbeam vote."

The writer was Mike Royko, who then started referring to the then-38-year-old Brown as "Gov. Moonbeam." Royko was suggesting that Brown was attracting California's New Age crowd.

Brown was a strong supporter of space exploration and many of the earliest statewide green initiatives. Yet he also gained a reputation as a fiscal conservative, refusing many perks that came with the governorship.

Royko eventually retracted his statement, and in 1991 in the Chicago Tribune, he called the moniker "null, void and deceased." He called it a "meaningless throwaway line."

But in 1991, when Brown announced he would run for president, Roger Simon wrote in the Los Angeles Times: "It's not so much that Brown has changed but that the times have changed around him. I'm serious when I say that in some ways America has caught up with Jerry Brown."

Regardless, Gov. Moonbeam's latest actions are simply another point in the left's war against President Trump. As noted out by the president, Gov. Brown is willing to pardon violent criminals simply to make a point against conservatives and the executive branch. His question bears repeating, is that Californian's actually want?