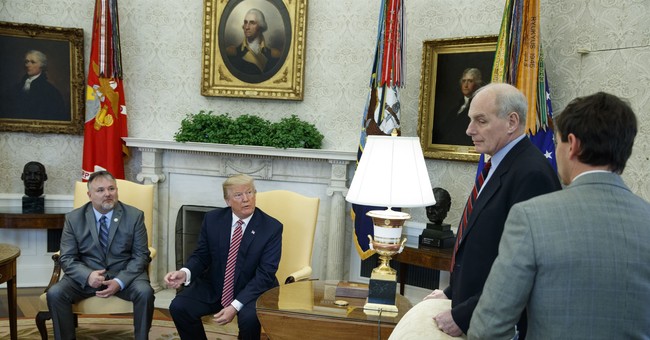 Last year, Townhall reported on President Donald J. Trump's generous donation to a campaign volunteer's father, Don Bouvet, for bladder cancer treatment. Today, Bouvet says the gift of $10,000 from the president saved his life and that he is now cancer free.

Don Bouvet’s son, Shane, was a volunteer on President Trump's presidential campaign. After meeting with the president the night before his inauguration, Shane informed Trump of his dad’s condition with bladder cancer. President Trump was so touched by Shane’s dedication to both his father and his country, that the former real estate and reality TV mogul cut a check of 10 grand from his own pocket to help cover financial costs for chemotherapy.

Because of that, the Bouvets were able to get the necessary treatment for recovery. “The president saved my life,” Bouvet said to NBC 4 in Washington, DC. Don and Shane Bouvet got a chance to meet with the president in the oval office on Friday and tell the president firsthand.

According to NBC 4, Don Bouvet says he was very humbled to meet President Trump and thank him in person.

"It's very emotional because ... one day I wanted to come here, or meet you somewhere, shake your hand, look you in the eye, and say, 'Thank you for saving my life,'" Don Bouvet told the president.  "And I thank you from the bottom of my heart."

Trump was apparently so impressed that he gave the Bouvets another check for $5,000, Shane told NBC4. The Bouvets also left with another, possibly priceless, souvenir: a plaque with a note personally signed by Trump that reads, “To Shane, Great Going!”

The Bouvets said that Trump donated his personal money, which campaign finance experts told NBC4 complies with all relevant laws.

President Trump also said that “His father, Donald, was suffering and really on a pretty final path towards losing his life.” The Bouvets hail from Illinois, where Shane works as a nighttime delivery man.

Don Bouvet also told the media that next to his wedding day, meeting President Trump while cancer free is the best day of his life.  Shane said he was “totally blessed” after receiving the check. His father said they would not have been able to afford treatment if not for the generosity of the commander-in-chief.