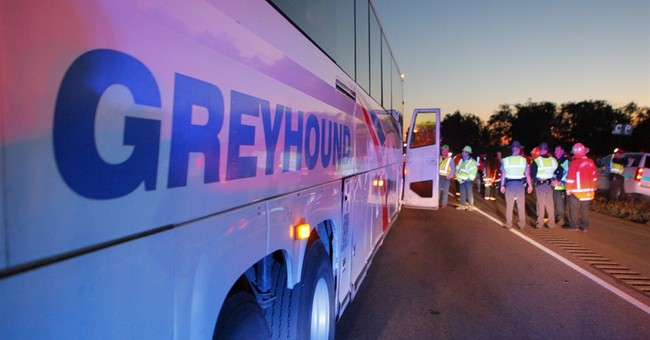 An illegal alien residing in the Chicago area has been arrested after allegedly making death threats to fellow travelers on a Greyhound bus late Friday night which led to a 17 mile long police car chase, reports WGNTV.

Margarito Vargas-Rosas, age 33, was arrested after a passenger called local police around 9:40 PM Friday night from a Greyhound bus in Wisconsin. The passenger reported a man threatening to shoot everybody onboard.

Racine County Sheriffs quickly located the bus on I-94 in Wisconsin but the bus driver, seemingly unaware of the brouhaha behind him, refused to pull over. He thought that the police were going after somebody else. Authorities thought that the bus had been hijacked and called for backup. As a result, about 2 dozen officers pursued the bus for over 17 miles. Eventually, the bus was stopped after authorities put out spike strips - devices used to stop car-chases by deflating the pursued vehicle’s tires once the strip is run over.

Authorities then evacuated the 36 passengers and arrested Vargas-Rosas. The man continued to make death threats against police officers.

Several witnesses confirmed that there had been a dispute between Vargas-Rosas and another passenger, which led to the illegal immigrant saying that he was going to shoot everybody on the bus and acted as if he was carrying a firearm.

According to police, he was deported in 2012 but somehow snuck back into the country and relocated to Chicago.

"(He) has been in our country illegally and has been deported some time ago back to Mexico and by virtue of his actions last night, he's back and threatening to kill Americans," Racine County sheriff Christopher Schmaling said.

The illegal alien is currently being held in an Illinois jail. He is being charged with making terroristic threats, a felony, and disorderly conduct.