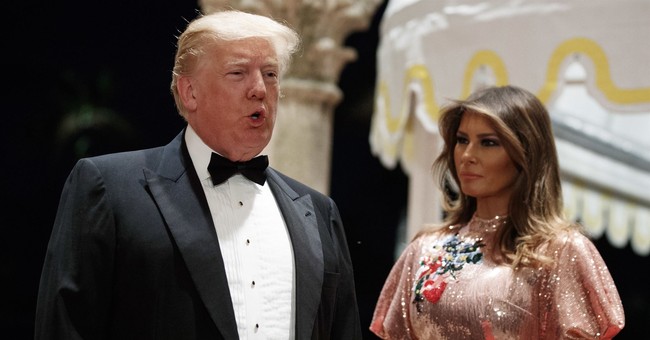 President Donald J. Trump took to Twitter Saturday morning to fight back against critics who claim the 45th commander-in-chief is unfit for office. In a series of tweets, President Trump accused the media of using the same tactics as they did against Ronald Reagan, lambasted Crooked Hillary, and claimed to be a 'very stable genius'.

Now that Russian collusion, after one year of intense study, has proven to be a total hoax on the American public, the Democrats and their lapdogs, the Fake News Mainstream Media, are taking out the old Ronald Reagan playbook and screaming mental stability and intelligence.....

....Actually, throughout my life, my two greatest assets have been mental stability and being, like, really smart. Crooked Hillary Clinton also played these cards very hard and, as everyone knows, went down in flames. I went from VERY successful businessman, to top T.V. Star.....

....to President of the United States (on my first try). I think that would qualify as not smart, but genius....and a very stable genius at that!

Critics of Donald J. Trump have characterized him as mentally insane since before he even won the presidency. However, recently this criticism has peaked as former Chief Strategist Steve Bannon accused the presidency of being mentally unfit for office. Earlier this week Sarah Huckabee Sanders addressed those claims:

If [Trump] was unfit, he probably would not be sitting there and would not have defeated the most qualified group of candidates the Republican Party has ever seen. This is an incredibly — strong and good leader, that is why we have had such a successful 2017 and why we are going to continue to do great things as we move forward in the administration.

As for President Trump being a genius? It is unclear to me how intelligent it is to tweet statements such as the ones that he made this morning, but then again I am not the billionaire leader of the free world who has had unprecedented economic growth, defeated ISIS, and passed massive tax reform his first year in office. All I know is that you cannot be stupid and win the presidency.