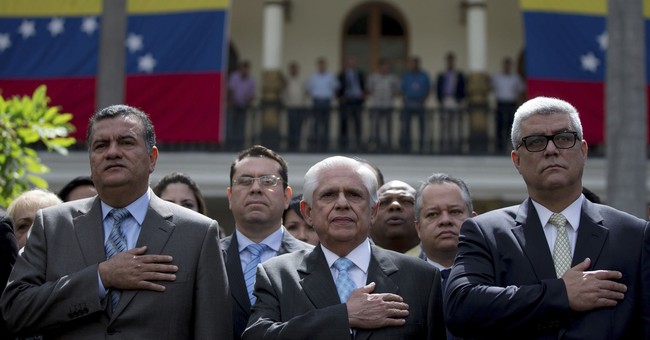 Venezuelans clamored for food outside supermarkets in the impoverished country on Saturday, after leftwing socialist President Nicolas Maudro forced grocery stores to cut prices so that millions of people could afford to feed their families.

According to Reuters, the scene was chaotic.

“At one supermarket in a high-end district of Caracas, hundreds of people including babies, pensioners and children with disabilities gathered in chaotic scenes. "We're hungry! We want food!" they screamed. "In my house, we don't eat three times a day," said Mileidy Acosta, a 28-year-old with three children. "People are fed up. A person earning the minimum wage couldn't buy even tomato sauce."

Reuters continues, detailing the living hell that these citizens are experiencing due to socialism.

“Maduro raised the minimum wage this year, though at the black market exchange rate it is still worth just $2 per month. The Venezuelan currency has weakened some 98 percent against the U.S. dollar in the last year.

On top of hunger affecting millions, shortages of medicines have led to needless deaths as the country goes through an economic crisis. Long supermarket lines and people eating from the trash are common sights.”

As pointed out by William Amos on Twitter, Reuters reporter Alexandra Ulmer highlighted the long grocery lines for basic needs.

Small groups now being let into this Caracas supermarket. Maduro has ordered stores slash prices amid hyperinflation. Several people I interviewed said that’s a destructive policy, but they can’t afford to feed their kids at current prices, so they’ve been here queuing since dawn pic.twitter.com/P4Bxnu5y0P

First people starting to emerge from supermarket. Jesus, 29, queued overnight only to find that just crackers and washing liquid were discounted. “How do I feed my three kids?” He asks, concluding the only solution is to leave Venezuela. pic.twitter.com/NccRKm6fuv

In September, Matt highlighted how desperate these people are for food and living supplies. Many citizens, including kids, have turned to prostitution and eating household pets in order to make money and stay alive.

We all know Venezuela is a socialist hellhole. The people have to deal with energy shortages and the resulting rolling blackouts. Basic items, like toilet paper, are lacking. They’re eating dogs, cats, and even zoo animals due to food shortages. Everyone from soldiers to the middle class is eating what they can out of garbage cans. In the hospitals, the lack of supplies has degraded health care in the country to conditions not seen since the 19th century. Soap and gloves are in short supply, with reports of cardboard boxes being used to give newborns some sort of bedding. The government has also resorted to weaponizing food (what’s left of it) to punish those who have criticized the socialist government led by the successor of the late Hugo Chavez, Nicolas Maduro. Now, with supplies dangerously low, we have this story from the Miami Herald, where they detail how teachers, doctors, and engineers have resorted to prostitution for food.

As one citizen noted today, the price cuts only briefly offer temporary relief.

"This doesn't help us. If they supply something, it'll be gone in a few days and they won't supply more," said Edgar Romero, a 45-year-old drummer. "But we have to eat."

Far left Democrats have praised Venezuela for years as a model of progressive paradise. In 2011, Bernie Sanders said in an official press release, “These days, the American dream is more apt to be realized in South America, in places such as Ecuador, Venezuela and Argentina, where incomes are actually more equal today than they are in the land of Horatio Alger.” That of course turned out not to be true.