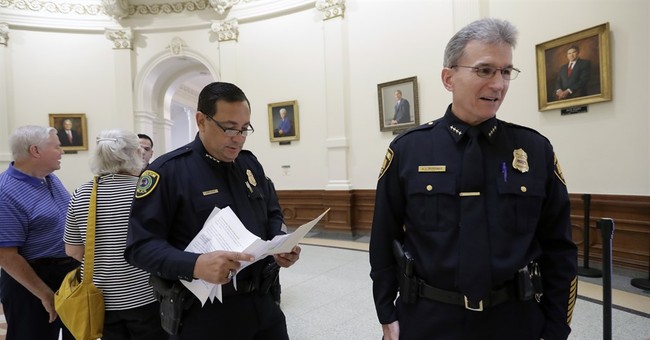 Controversy swirls in Texas as the San Antonio Police Department has been criticized for its judgement in a human smuggling incident, after a case involving 12 alleged illegal aliens was not turned over to U.S. Immigration and Custom Enforcement. Instead, SAPD opted to handle the case locally and allow these individuals free without so much as a fingerprint or background check. However, SAPD Chief William McManus maintains that his decision to not contact the federal agency was well within his rights as police chief.

Two drivers were arrested on December 23rd, 2017 after police discovered 11 adults and one minor, possibly from Guatemala, riding in the back of their semi-truck trailer in the San Antonio area.

After arresting the two men, SAPD failed to alert ICE of the passengers in the back of the truck. Instead, they brought the stowaways to the local police station and contacted an immigrant aid organization. These 12 alleged illegal aliens were then let go without any charges. The two drivers who were arrested will be tried in district court in 2018. As for their passengers, at least one councilman questions why they were not given a background check before being released.

Councilman Greg Brockhouse told the Current he believed McManus had “more than enough probable cause” to assume the smuggled immigrants were undocumented — enough to prompt officers to at least run a criminal background check on the dozen, if not call in the feds.

“All I’m asking is that we make sure we’re not releasing a felon into the public,” Brockhouse said. “The policy can’t be on the fly ... based on what the chief feels like doing that day.”

He publicly questioned McManus’s decision in a Friday media release, suggesting the chief had dodged SAPD protocol and calling for an investigation into how the incident was handled.

McManus responded saying that it was against SAPD procedure to run a background check in certain circumstances involving smuggling victims.

"I gave no direction to skip or disregard standard protocol or process," McManus wrote. "No background checks or fingerprints were taken of the 12 victims because it is against procedure to do so of victims of crime or witnesses to a crime, especially in the context of a human smuggling case."

He also claims that a U.S. Homeland Security Investigations officer was present while the 12 passengers were released.

"At no time did SAPD restrict or prevent the HSI agent from taking custody of the individuals," McManus wrote.

According to SA Current, McManus is correct in claiming that he conducted proper procedure in not contacting ICE.

SAPD's general manual echoes his claims. Under the "Human Trafficking" section (last revised in 2012), it reads: "Human Smuggling cases usually require the response of a federal law enforcement agency," but it doesn't mandate officers contact the feds on the scene. Only in the follow-up part of the investigation is an SAPD officer required to "notify and coordinate with federal authorities and provide assistance as necessary."

One former HSI agent told SA Current that he had never seen anything like it.

"I can’t recall a situation like this, where the state [or] local chose to use a state statute instead of letting us work the case," said Jerry Robinette, a former special agent in charge of HSI in San Antonio, in an interview with The Intercept. “Look, if this was a car that was driving to the grocery store with two or three illegal aliens, I could understand this situation, but not a tractor trailer."

This case comes as debate across the nation heats up regarding local and state immigration cooperation with the federal government.