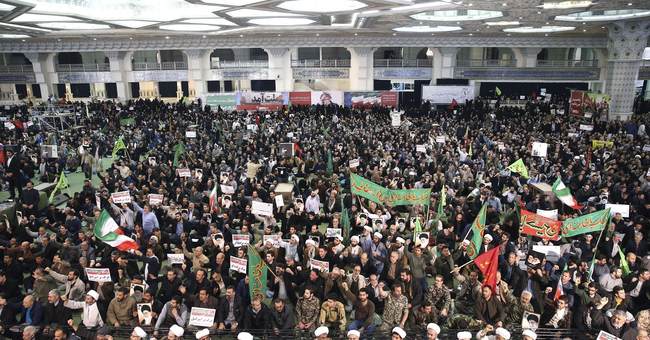 Protests beginning Thursday sparked by economic unrest in Iran have quickly turned into massive demonstrations, not just against economic policy, but against the Islamist controlled government as a whole. These gatherings are the largest form of anti-government demonstrations in the middle eastern country since 2009. Citizens continued demonstrations Saturday in the cities of Teheran, Kermanshah, as well as nearly 20 other locations chanting against Iran's President Hassan Rouhani as well as the Supreme Ayatollah Ali Khamenei

What started as smaller protests against poor economic conditions, allegations of corruption, as well as the Iranian government's involvement in foreign nations has quickly engulfed Iran in the largest showing against the theocratic state in nearly a decade. Labor protests are not abnormal in Iran, but the political and religious nature of these protests have given hope to thousands, if not millions, of people that this dissent shows an opportunity for true reform in the country.

Many reports of peaceful protests by Iranian citizens fed up with regime’s corruption & its squandering of the nation’s wealth to fund terrorism abroad. Iranian govt should respect their people’s rights, including right to express themselves. The world is watching! #IranProtests

Reports of peaceful protests by Iranian citizens fed up with the regime’s corruption and its squandering of the nation’s wealth to fund terrorism abroad. The Iranian government should respect their people’s rights including their right to express themselves. The world is watching

We are following reports of multiple peaceful protests by Iranian citizens. The United States strongly condemns the arrest of peaceful protesters in #Iran. We urge all nations to publicly support the Iranian people. https://t.co/4spSF6IX1i #Iranprotests pic.twitter.com/jDbEDM0P8F

Other United States officials showed support for the protesters as well.

(2/2) I stand with the Iranian people in their demand for prosperity and freedom, and call upon my colleagues in the Congress to join me. #utpol #FreeIran

Since the 1979 Iranian Revolution, which established Islamic rule in the once free and prosperous country, women have been historically oppressed. However, brave women are now taking to the streets in defiance of Sharia law. These protests are reminiscent of 1979 when thousands of women publicly condemned the government imposed veiling of women.

#IranProtests: Hundreds of thousands across #Iran chant "We don't want Islamic Republic!" & "Clerics shame on you, let go of our country!" Woman in video took off her #Hijab to protest Islamic dress code imposed on Iranian women since 1979. #IStandWithHer pic.twitter.com/CHNwrTsWPA

In a blow to the Ayatollah, Iranian police announced they would not arrest women who refused to abide by Islamic dress code. “Those who do not observe the Islamic dress code will no longer be taken to detention centers, nor will judicial cases be filed against them,” Tehran police chief General Hossein Rahimi said to the press.

It is unclear how long these protests will occur nor what the outcome will be. TownHall coverage will continue in the following days as more details and events occur.