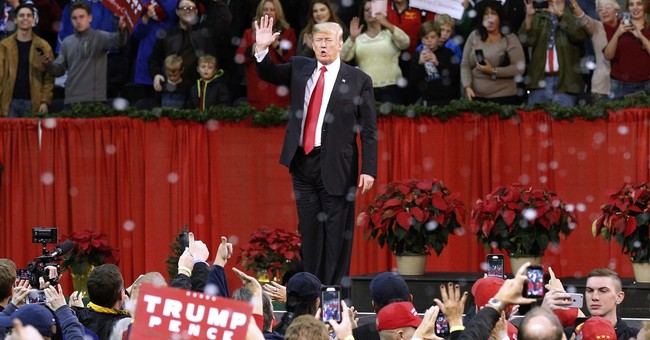 President Donald J. Trump rallied his base at a “Make America Great Again” event in Pensacola, Florida on Friday evening, reports Fox News. The 45th President urged Alabama citizens to vote for GOP senate candidate Roy Moore, blasted the mainstream media, and said America’s institutions have a “sick system from the inside.”

"We cannot afford ... to lose a seat in the very, very close United States Senate," Trump said of Roy Moore. "We need somebody in that Senate seat who will vote for our 'Make America Great Again' agenda … So get out and vote for Roy Moore. Do it. Do it."

"We can’t afford to have a liberal Democrat who is completely controlled by Nancy Pelosi and Chuck Schumer," the president said. "His name is Jones and he’s their total puppet and everybody knows it."

Moore has been dogged throughout his senatorial campaign by various accounts of women who claim that the GOP candidate either dated or sexually assaulted them while they were teenagers and he was in his thirties.

The president  pointed out the questionable circumstances surrounding one of those accuser’s claim that Roy Moore signed her yearbook. Yesterday, Beverly Nelson admitted that she altered part of the now infamous yearbook signature from 1977 by adding the date and location.

"So did you see what happened today?" Trump asked. "You know, the yearbook? Did you see that? There was a little mistake made, She started writing things in the yearbook."

Trump then took a shot at Nelson's lawyer, Gloria Allred, saying, "Anytime you see her, you know something's gone wrong."

On Friday, CNN ran a fake news story based upon two anonymous sources claiming that Wikileaks had given Donald Trump Jr. an encryption key via e-mail for hacked documents during the 2016 election on September 4th, 2016 prior to these documents being released to the public. However, CNN has since corrected the report saying that e-mail was actually received on September 14th,  2016. That date is after the documents had been released to the public. CNN claimed their trusted sources received bad information. Thus, the alleged collusion between Wikileaks and the Trump campaign was a moot point as it did not exist in this circumstance.

"They apologized! Thank you CNN!" Trump cried in mock gratitude. "Thank you so much! You should have been apologizing for the last two years."

However, CNN anchor Brian Stelter tweeted while the network corrected the mistake, they certainly did not apologize for reporting false information and trusting unreliable sources.

Trump: "Did you see all the corrections the media's been making?" He says "they've been apologizing left and right." Calls Brian Ross a "fraudster" who should have been fired. Says CNN "apologized" for today's mistake (CNN corrected it but did not apologize)

President Trump also remarked on the overall health of the integrity of the United States government.

"This is a sick system from the inside," Trump said. "And, you know, there is no country like our country but we have a lot of sickness in some of our institutions."

The rally, just south of the Alabama border, comes only four days before the special election between Democrat Doug Jones and GOP candidate Roy Moore. The White House maintains the event was not a campaign stop for Moore.