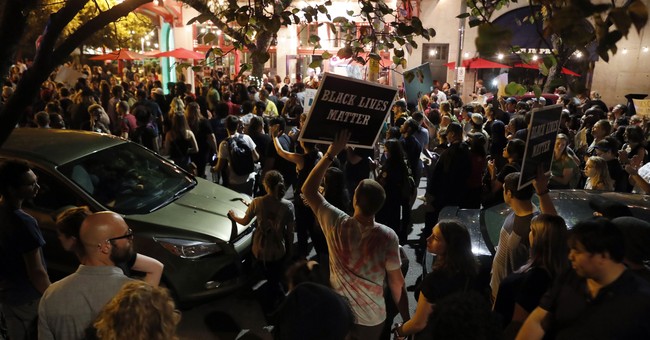 On Friday night, more than 20 arrests were made in St. Louis, MO when riots broke out after a judge acquitted a white former St. Louis police officer Jason Stockley for first degree murder of a black man named Anthony Smith in 2011. Rioters for weeks promised civil disobedience, but as night fell words quickly turned into actions as the city of St. Louis once again was plagued by violence and mayhem.

10 police officers were injured by violent protesters including a broken jaw during the riots which started when protesters surrounded a bus of St. Louis officers armed in riot gear. The violence though was not aimed towards just police.

Protesters burned American flags, targeted a Subway restaurant, and even ransacked the library.

Citizens attacked St. Louis Mayor Lyda Krewson’s home on Friday, throwing rocks and smashing windows. Earlier in the day Mayor Krewson issued a statement which noted “I am sobered by this outcome. Frustration, anger, hurt, pain, hope and love all intermingle. I encourage St. Louisans to show each other compassion, to recognize that we all have different experiences and backgrounds and that we all come to this with real feelings and experiences.”

The raucous crowd even turned on a local reporter. This was, as he described it, “the scariest moment in (his) career.”

Scariest moment in my career. Protesters upset about not guilty verdict for an officer accused of killing a suspect, turn on me and media. pic.twitter.com/iZyvg3gX0p

The popular Irish band U2 was scheduled to preform in St. Louis tonight, but St. Louis Police informed the band they would be unable to provide adequate protection. Upon the police departments recommendation, U2 cancelled their concert. The band told disappointed concert goers “we cannot in good conscience risk our fans’ safety by proceeding with tonight’s concert.”

In 2011, Stockley and his partner suspected Smith of running a drug deal in a fast-food restaurant and moved in to arrest him. Smith fled the scene resulting in a chase through the street of St. Louis that ultimately ended in Smith crashing his car.

Stockley testified he fatally shot Smith in self-defense, claiming he saw Smith’s silver revolver when he fled the scene. While Stockley was recorded on dashcam footage saying he was “going to kill this (expletive), don’t you know it.” There was insufficient evidence to show these words  were anything but heightened emotions during an intense and stressful situation, argued his lawyer.

Recommended
Well, That’s Not the Retirement Message Some Employees Were Expecting from a Diversity Consultant Firm
Matt Vespa

“I can feel for and I understand what the family is going through, and I know everyone wants someone to blame, but I’m just not the guy,” said Stockley after the not-guilty verdict was issued.

Police are continuing to prep for riots tonight, as they are expected to continue throughout the weekend.

Share this on Facebook
Tweet
It's Over: Senate Republicans Defeat Corrupt 'For the People Act'
Reagan McCarthy
Well, That’s Not the Retirement Message Some Employees Were Expecting from a Diversity Consultant Firm
Matt Vespa
Escape from New York: WSJ Hopes for City's Revival, But Zeroes in on the Candidate Who Must Lose At All Costs
Matt Vespa