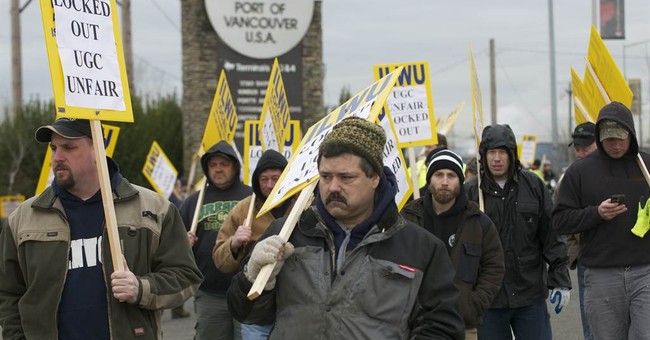 Just when you think Big Labor can't get any lower, you're in for a shock -- courtesy of the Teamsters. The powerful union was picketing funerals at 16 Illinois funeral homes, harassing grief-stricken families and disrupting services. Now an appellate judge has ordered them to stop.

A judge ordered one of Chicago’s most politically powerful labor unions to suspend picketing against 16 funeral homes last week after receiving reports that striking Teamsters had, among other things, disturbed a child’s funeral.

The company testified in its filing that union members blocked grieving family members from leaving its parking lot, used bullhorns to shout obscenities at workers and mourners, and unleashed a German Shepherd on a dead woman’s daughter and husband.

The funeral home was eventually forced to call the police when picketers allegedly disrupted a child’s funeral with laughter. The officer asked the Teamsters to leave, but protesters returned when he drove away.

“We will be here for the visitation; we will be here for your funeral,” Teamster driver Lester Plewa allegedly shouted into a bullhorn as a funeral director met with a dying man planning his arrangements with family members.

The appellate court ordered the Teamsters on July 25 to “refrain from conveying any actual or veiled threats against any person, also, refrain from obstructing, hindering, impeding or blocking any person’s entry to or exit from any funeral site or any facility containing a funeral site.”

The Teamsters have been on strike since July 1 after rejecting the company’s offer of nine percent raises for all union members over the next two years.

Greed can lead people to do some pretty awful things, but this about tops the list. Nine percent pay raise? Not good enough for the Teamsters. Their solution? Picket the funerals of people who have nothing to do with the labor dispute. And an everyday picket wasn't good enough. No, the Teamsters had to bring in their big guns -- German Shepherds, expletives shouted over bullhorn at mourning families, laughter at dead children. These are real tough guys.

But let's not forget the President's connection to this illustrious group.

Secretary-Treasurer John T. Coli, one of Illinois’ most influential labor leaders, heads the 6,800-member union. Coli brokered the Teamsters endorsement of Barack Obama during his then-long shot campaign for the Democratic nomination—a major turning point in the 2008 primary.

Obama, then a junior senator of Illinois, pledged in private meetings with Teamster leadership to end federal oversight of the powerful union, which had come under scrutiny for its ties to the mafia under Jimmy Hoffa, father to current Teamsters President James Hoffa Jr. Both sides denied any quid pro quo in the deal.

Coli has since arranged other political endorsements that have worked in the union’s favor. The Teamsters were the only major labor organization to endorse President Barack Obama’s chief of staff Rahm Emanuel’s mayoral campaign. Emanuel pledged to crack down on unions to help resolve Chicago’s then-$650 million budget deficit.

A Chicago Tribune analysis found that only one of the nine labor reforms proposed by Emanuel after his election would hurt the Teamsters, while some of the proposals, such as privatizing city recycling, would increase the union’s private sector workload.

Labor Unions like the Teamsters are the heart and soul of Democratic Party fundraising. Will Democrats keep taking money from the Teamsters? Probably so. The next time you run across a candidate funded by the Teamsters, ask them how they feel about accepting donations from people who laugh at dead children.