Arizona Student Suspended for Asking that Classes be Taught in English 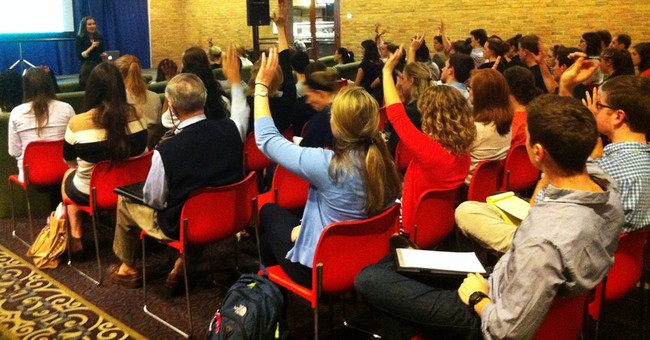 A 50-year-old community college student in Arizona has been suspended -- her crime: asking that class discussions be conducted in English. When the nursing student filed a complaint about the issue, claiming that Spanish-dominated class discussions were preventing her from learning, her program director at the college found the complaint discriminatory against Hispanic students and responded by suspending her, even calling the student "a bigot and a b--ch." The student has now filed a lawsuit. Here's the story:

A nursing student at Pima Community College (PCC) has filed a lawsuit claiming that she was illegally suspended after she complained that her classmates were speaking in Spanish and orally translating English to Spanish so excessively that she was failing to learn.

Kutzler allegedly charged that Bennett was “discriminating against Mexican-Americans” and threatened to report her complaint as a violation of the school’s policies against discriminatory behavior and harassment.

A second meeting two days later involved Bennett, Kutzler and three more PCC staffers. The public school officials allegedly told Bennett that she would “not get a job” because of her desire to limit class discussion to English. She claims they said she should “seek counseling” and that she might have a learning disability.

Later in April, Bennett received critical feedback from a teacher—for the first time, she maintains. The critique chastised Bennett for “ineffective communication skills.” Then, on April 22, Bennett received a suspension letter from the state-owned school.

It's a twisted day in America when a student has "ineffective communications skills" because she speaks English. Foreign language skills are beneficial for workers in a variety of fields, but to punish a community college student for lacking Spanish proficiency is obviously absurd. The Arizona Constitution reads: "...schools shall always be conducted in English." In light of this, it'd be hard to imagine the student losing her case.

In considering immigration reform, it's important we consider the social dimension to immigration -- not just the dollars and cents. This is why, in terms of legal immigration, we'd be smart to allow more people from countries underrepresented among recent immigrants.