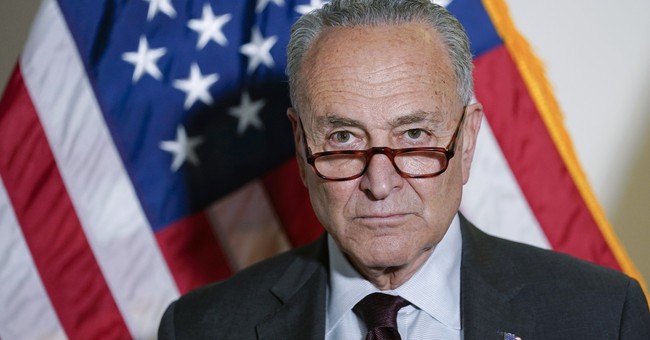 After speaking urgently about the need to force legislation through Congress that — according to Democrats — would make it more difficult for people to obtain firearms or use them in violent attacks, the Senate's Democrat Majority Leader Chuck Schumer is scuttling those plans ahead of the long Memorial Day weekend.

Initially, mainstream outlets were reporting on Schumer's late night efforts to clear the way for the Senate to take up so-called gun control legislation (so-called because clearly the laws don't dissuade criminals already breaking the law) as a swift response to the tragedy that unfolded Tuesday in Uvalde, Texas.

"We are going to vote on gun legislation," pledged Senate Majority Leader Chuck Schumer (D-NY) from the floor of the United States Senate on Wednesday in the wake of horrific shooting carried out by a madman who shot his grandmother in the face before racing to Robb Elementary School and murdering 19 students and two teachers.

The New York Times also reported urgently that, "Within hours of the shooting in Uvalde, Senator Chuck Schumer...moved to clear the way to force votes in coming days on legislation that would strengthen background checks for gun purchasers."

So Schumer and his allies in the mainstream media depicted the majority leader as a man of action swiftly moving to clear a path to passage for leftist legislation that House Speaker Nancy Pelosi had previously passed through the lower chamber.

But, he isn't acting — he and his Democrat colleagues are heading out of town to take advantage of a long holiday weekend. So...gun control isn't a pressing emergency priority? Or, at least, not more of a priority than Schumer and his fellow Democrats' plans for Memorial Day BBQs.

Once again: Schumer is the worst Majority Leader in modern history.

He moved to put votes on the schedule last night to get retweets.. then realized holding those votes would cut into his members Memorial Day plans so now has to cancel and look foolish. https://t.co/3kwg9u6kF0

According to the tentative Senate legislative schedule, members of the upper chamber are scheduled to be out of session from May 28 to June 5 — a break from Washington that Schumer found necessary and important above and beyond whatever action he said must be taken to prevent another tragic shooting. Adding to the pile of evidence that Democrats don't care all that much about taking action they claim will save lives, Schumer had also promised to bring the enhanced background check legislation to the floor throughout 2021, but never did so then, either.