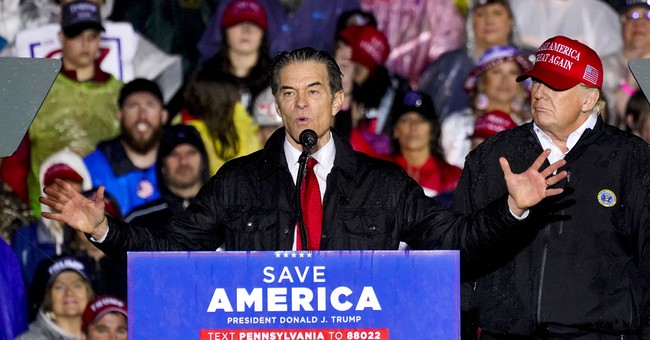 More than one week after a tumultuous seven-way battle between Pennsylvania Republicans seeking to fill the shoes of retiring incumbent GOP Senator Pat Toomey was supposed to be decided on primary day, a winner still hasn't been declared. The race remained too close to call, and still does on Wednesday, as the Keystone State's top election official ordered a recount.

In Pennsylvania, an automatic recount is triggered when candidates are within 0.5 percent and, sure enough, Pennsylvania’s Acting Secretary of State Leigh Chapman announced Wednesday that there would be a recount in the GOP Senate primary.

The two frontrunners — Mehmet Oz and David McCormick — have been separated by roughly 1,000 votes out of more than 1.3 million ballots counted so far.

It’s official - Pennsylvania will conduct a statewide automatic recount of the GOP Senate Primary. Recount begins this Friday. It must be completed by June 7th. Dr. Oz leads McCormick by just 902 votes. There are still 10k absentee/military/provisional ballots left to be counted.

The recount will begin on Friday before the long Memorial Day weekend, and the tabulation of final results must be completed by June 7th — at which point Pennsylvanians will finally know who will represent the GOP in November's critical midterm race against Democrat John Fetterman. It will either be TV doc Mehmet Oz — who was endorsed by former President Donald Trump — or businessman David McCormick.

The latter filed a lawsuit on Monday to require election officials to count mail ballots that lacked a date on their outer envelope, as required by Pennsylvania election code. But that move drew opposition from the Republican National Committee and Republican Party of Pennsylvania who intervened against McCormick in the litigation.

Full county-by-county results — as they stand at the time the recount was ordered — can be viewed below. There are still, according to reports, roughly 10,000 uncounted ballots that are eligible to be included in the final count, meaning the race could still go either way by the time the final winner is announced in the first week of June.