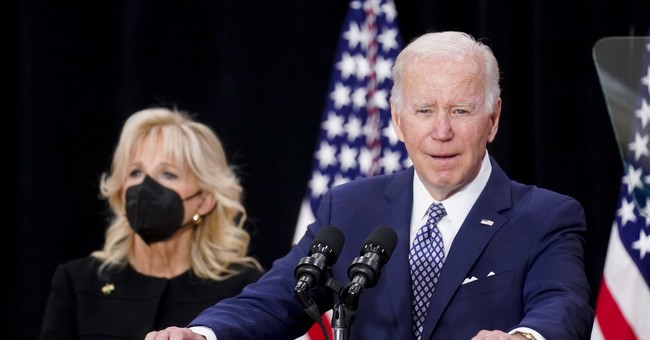 Apparently continuing the method he perfected during the 2020 campaign in which his aides kept him insulated in his Delaware basement for months on end, President Joe Biden has now gone 100 days without doing an interview with reporters — mainstream liberal or otherwise.

The last time the President of the United States sat down to answer questions was February 10, when Biden did an interview with NBC's Lester Holt. Meanwhile, Biden has not been too busy to take frequent long-weekend trips to his homes in Delaware, head to Asia and Europe, or travel around the country touting his few legislative agenda items that managed to make it through the Democrat-controlled Congress. But he won't face questions when it comes to those pieces of legislation, the many that didn't make it past his own party on Capitol Hill, or the growing number of crises burdening the American people.

And while the 100-day mark — clocked by the Republican National Committee — without an interview is a sign of President Biden's inability or unwillingness to accept responsibility, it's just standard operating procedure for Joe Biden who remains hidden away and not even allowed to do events in the Oval Office due to its lack of a permanently installed teleprompter.

According to publicly available data, President Biden has done just 23 interviews since he took office last January. That's the least of any president at this point in their tenure going back to at least President Ronald Reagan.

Here's how Hidin' Biden stacks up against his predecessors when it comes to interviews granted between the date of their inauguration and April 29th of the following year:

In the same timeframe that Biden did 23 interviews, First Lady Jill Biden did at least 22 — even though she doesn't have a direct role in policy. Vice President Kamala Harris, not known for being a great interview (see also: "I haven't been to Europe"), has done 88 — almost four times the number the president has.

Biden's failure to be accessible to the media — or to answer a growing number of questions about what he and his administration are doing to reduce inflationary pain, lower gas prices, secure the border, crack down on crime, or make the U.S. stronger against Russia and China — comes after the mainstream media and Democrats went apoplectic over what they said was an inaccessible Trump administration.

Of course, President Trump was one of the most accessible presidents in modern history, but their outrage over an alleged lack of access that supposedly endangered democracy has all but evaporated as Biden has gone 100 days without facing an interviewer's questions.

"Joe Biden promised to have the most transparent administration in history, another blatant lie to the American people," RNC spokesperson Emma Vaughn told Townhall. "100 days without a press interview underscores how little Biden cares to answer for struggling Americans seeking solutions to the crises he created. This milestone is yet another pitiful mark on Biden's long list of failures," she added.