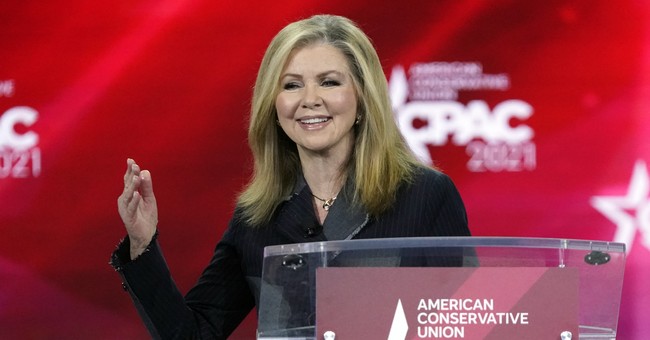 During a meeting of the Metropolitan Nashville Board of Public Education this week, a hot mic caught board members apparently pondering "can we just go set Marsha Blackburn on fire?" — the latest instance of public school boards saying the quiet part out loud and revealing their partisan hostility against conservatives and Republicans.

Video from the meeting, posted here on March 23rd by the district, captures the moment starting around the 1:02 mark after the school board tried to bring its meeting to order but, still lacking a quorum, called for a short break during which a copy of the meeting agenda appears on screen but voices can still be heard, picked up by the mics on the dais.

Members of the @MetroSchools School Board were caught on a hot-mic during a board meeting wishing that they could "just go set Marsha Blackburn on fire."

"Have you been watching these Supreme Court...," says an unidentified voice.

"Let me tell y'all," says another.

"She is something else," says one, apparently speaking of Judge Ketanji Brown Jackson.

"I love her," gushes another about Biden's SCOTUS nominee.

"Can we just go set Marsha Blackburn on fire?" says one, taking the conversation in a dark direction.

How nice of the folks in charge of Nashville's public schools to be modeling civility for their district's students by... threatening to set a sitting United States Senator on fire. The comment — we hope — is just a unhinged outburst and not an actual threat against the life of Senator Blackburn, but the sentiment remains troubling nonetheless.

It's hardly the first time Blackburn has been attacked for her stalwart defense of conservative principles. Heck, even Taylor Swift tried to take down her U.S. Senate bid by endorsing Blackburn's Democrat opponent, but that attempt — much like Swift's overly performative Netflix documentary — bombed.

This week, Senator Blackburn has been among Judiciary Committee Republicans leading lines of firm but fair questioning of President Biden's Supreme Court nominee Judge Ketanji Brown Jackson. Senator Blackburn's questions illuminated Judge Jackson's inability to define what a "woman" is and dug into the nominee's apparent embrace of the radical left's gender politics, as seen at the Georgetown Day School where Jackson is a trustee.

Like most strong conservative women, Blackburn is not in the Senate to seek accolades from mainstream sources, nor for the snaps of approval that come from the loud woke masses, nor the endorsement of celebrities who claim Tennessee as home but would be hard-pressed to name a city outside of Nashville.

No, Senator Blackburn is in it to represent real Tennesseans who were shocked to see a Harvard-educated Supreme Court nominee come up speechless when asked to define "woman," who don't think sex offenders should be given lenient sentences below federal guidelines, and who think Critical Race Theory should be rejected by Americans whose informed patriotism reveals America's greatness.

Unfortunately, the same can't be said for the members of the Metro Nashville School District, and that's why they're apparently spending their free time pondering how to set a U.S. Senator on fire. As if the last year's worth of attention on school board meetings hadn't already proven that these supposedly public servants had too much power or time on their hands, this instance puts an exclamation point on things.

Despite multiple calls to and messages left for the Metro Nashville School District on Friday, no comment was received before publication.