'Have We Learned Nothing?' Netanyahu Urges American Opposition to New Iran Deal 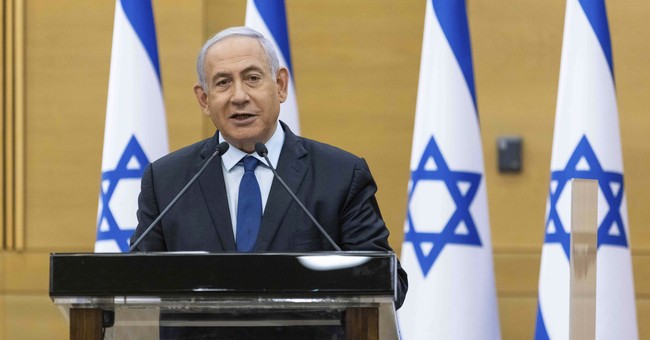 Former Prime Minister of Israel Benjamin Netanyahu released a video message directed at Americans over the weekend that appealed to U.S. citizens to oppose the Biden administration's attempt to rush into a revived version of the Obama-era Joint Comprehensive Plan of Action (JCPOA) that flooded the Iranian regime with cash and new power to ramp up its terror-sponsoring activities.

"The desperate rush to sign this flawed nuclear agreement with Iran is not only absurd, it's downright dangerous," Netanyahu said in the video. "Yesterday, Iran fired missiles in the vicinity of the American consulate in Iraq, and the U.S. continues to charge ahead along with the other powers to sign a nuclear agreement that will give the Ayatollahs a nuclear arsenal," he said emphasizing the latest aggression from Iran's regime.

"It would also relieve sanctions and give them hundreds of billions of dollars in order to continue the terror that they waged yesterday and wage everyday throughout the middle east and the world," Netanyahu added before saying President Biden's attempted agreement "is even worse than its predecessor because in three years' time, under this agreement, Iran will be a threshold nuclear state it will have enough enriched uranium to create dozens and dozens of nuclear bombs and it will have the ICBMs to deliver them to any place in the United States," he warned. "That is... unbelievable. It's not merely unacceptable, it endangers not only my country Israel, but your country the United States, and the entire world."

"We should not let an aggressive, rogue terrorist regime like Iran have nuclear weapons," Netanyahu reiterated. "Have we learned nothing?"

Every American family should watch this video. pic.twitter.com/BVo5ZFJwKk

Netanyahu's appeal comes as the Biden administration continues to apparently ignore Iran's long-running sponsorship of other terrorist groups and its own aggression in the region even after Iran launched an attack that came close to an American diplomatic complex in Irbil, Iraq.

According to State Department Spokesman Ned Price, "The strikes were an outrageous violation of Iraq’s sovereignty" but "No U.S. facilities were damaged or personnel injured, and we have no indications the attack was directed at the United States."

Price added a feeble plea that "Iran must immediately cease its attacks, respect Iraqi sovereignty, and halt its interference in Iraq’s internal affairs," though it's unclear what negotiating power Price, the State Department, or Biden administration thinks it has to make such a demand as the United States continues to seek a return to a nuclear deal with Iran that would prove lucrative and emboldening to the Ayatollahs.

As Guy has been covering, the Biden administration's attempt at a Kremlin-negotiated deal with Iran have been plagued with flaws from the start, issues that have only gotten worse amid Russia's invasion of Ukraine:

If you're just joining this controversy, feel free to go back and read our previous posts about it. This isn't some minor partisan squabble; it's a serious affront to the national security of the United States and her allies. It's so egregious, in fact, that three members of President Biden's own negotiating team have walked away in protest. The scope of the would-be giveaway is that vast and indefensible. And in an election year, with Democrats' collective fate heavily tied to the president's popularity, even some congressional Democrats are sounding the alarm.

Even if, against mounting odds, the Biden administration is somehow successful in its attempts to revive a nuclear deal with Iran, Republican lawmakers poised to regain control in Congress after the midterms have warned Iran and the world that a nuclear agreement would not survive their oversight.