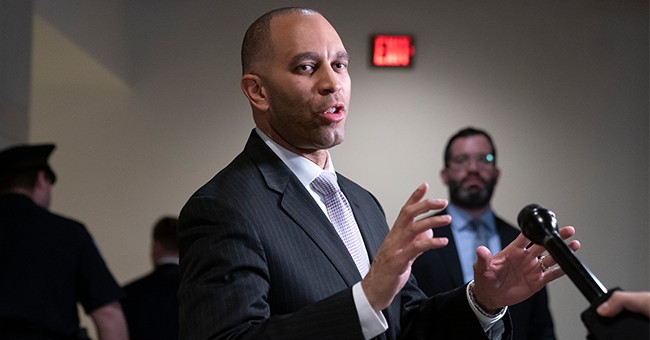 Of the Democrats most-used refrains, "pay your fair share" is one of their favorites. The line gets trotted out nearly every time a tax hike is being bandied about in Congress as an excuse for punishing successful individuals and businesses purely for being successful. The problem is that "fair share" is entirely subjective and the share ends up being whatever serves Democrats' needs for a specific piece of legislation.

Recently, "fair share" was even the basis for an unprovoked Twitter attack launched by Senator Elizabeth Warren (D-MA) against innovator and space enthusiast Elon Musk — who says he's set to pay some $11 billion in taxes for his 2021 income. If that's not a "fair share," it's hard to imagine what Senator Warren would find to be a fairer payment.

One of the Democrats' own though, U.S. Representative Hakeem Jeffries who serves as Chair of the House Democratic Caucus, turns out to be a fan of not paying his fair share. Thanks to a New York tax break that he supported while serving in the state legislature, he's paying a fraction of what his property tax bill would be without the relief, according to a report in The New York Post.

According to the report, Jeffries only pays a tax bill of about $210 for his condo in New York, valued at roughly $1.2 million. For comparison, the average New Yorker — many of whom Jeffries represents in Congress — pays some $5,000 per year in property taxes. The tax break costs New York "up to $1.6 billion a year in property tax revenues," money that could be well-spent on public safety as crime continues to spread.

Jeffries is benefitting from a law he supported that allows him to pay ONLY $210 in property taxes for his $1.2M Brooklyn condo. The average NYC homeowner pays $5k a year in property taxes. pic.twitter.com/ZPXFbGYnpu

So what gives? Why isn't Jeffries — someone with privilege and power — paying the full amount of taxes deemed fair for his neighbors and constituents? Well, it's another case of "rules for thee and not for me" from a Democrat who is considered to be a leading contender to replace Nancy Pelosi if she ever steps aside in Congress.

The tax break that Jeffries helped institute is meant as a reward to developers who allocate a certain percentage of units to be rented to low and middle income tenants. While it might sound like a nice thing to do, like other Democrat programs, the intervention in the free market resulted in people like Jeffries exploiting the plan for personal gain under the guise of helping others.

So while a powerful Democrat gaming the system he helped create for personal gain is sadly unsurprising, the silence from his colleagues who rant about Republicans and wealthy individuals not wanting to pay their fair share exposes more of the left's inane double standards. It's classic hypocrisy for people such as Senator Warren or members of The Squad to keep their lips sealed as one of their colleagues continues to abuse the system to avoid paying what has been determined to be his "fair share."