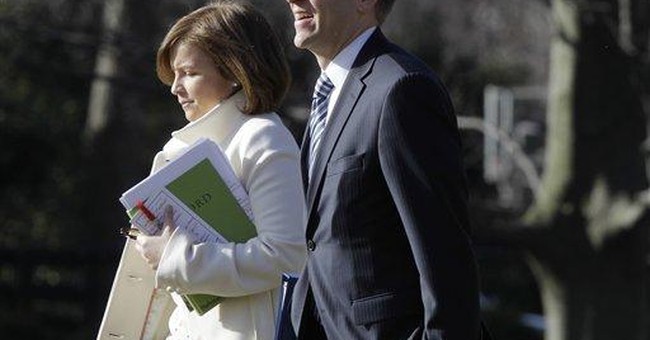 Democrats like to talk about being civil and supporting marginalized groups, but often the party that claims to support strong women and embrace civility is the most crass and vulgar toward women. In the days since Senator Kyrsten Sinema (D-AZ) was one of two Democrats to torpedo an attempt by Senate Majority Leader Chuck Schumer (D-NY) to nuke the legislative filibuster, her strength and independence have drawn renewed absurd and disgusting attacks by those who claim the mantle of supporting women and being adults in the room.

Thanks to the clowns who failed up from the scandal-plagued Obama administration to have their own podcast — Pod Save America — there's now a new example of how hypocritical Democrats can be when someone dares to defy their power-hungry, norm-shattering agenda.

Alyssa Mastromonaco, a former deputy chief of staff to President Obama who recently appeared with her follow Obama administration has-beens on Pod Save America, went on a profane rant about Senator Sinema with whom she has "real issues." Slamming Sinema for daring to think for herself, Mastromonaco said the Arizona Senator's defense of the filibuster was "the s***tiest, grossest, most disrespectful thing she could've done. I think she's a c***. That's what I have to say" Mastromonaco added.

So much for "civility" and supporting women. pic.twitter.com/vW3eTjj4wT

Real classy. Mastromonaco even argued that the use of the c-word didn't need to be bleeped out "because I'm a woman," and then continued her tirade. "It was so many layers of a**holeness, like you know she played a combative video game before she went down to the Senate floor and was like, 'you are a maverick, you are a maverick.' And b****, you're not a maverick, ok? No, you're trash." Project much, Alyssa?

The message Mastromonaco is sending to her fellow Democrats, especially women within her party, is that standing by one's convictions and being an independent thinker who votes her conscience listens to her constituents is little more than a "trash b**** c***." What incredible progress for women the Democrats are making.

Mastromonaco's memoir about her time in the White House is titled "Who Thought This Was a Good Idea?" — something Democrats should be asking themselves as they continue to attack and alienate someone who could theoretically kill any future legislation they want passed by the upper chamber in which they hold a razor-thin majority.

Mastromonaco's comments follow Berkeley professor and former Secretary of Labor Robert Reich's calls for violence against Senator Sinema for not voting as he wanted. As Katie reported, Reich said in a since-deleted tweet that after Sinema's vote protecting the legislative filibuster "Democratic senators should have given her the back of their hands."