'It All Depends': Biden Sows Doubts About Midterm Election Legitimacy 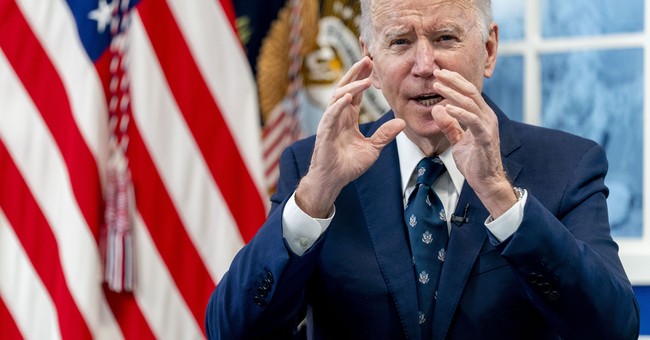 Answering questions about his crisis-plagued administration's tumultuous first year on Wednesday, President Biden was asked about his stalled "voting rights" bill that amounts to a federal takeover of elections and what its untimely death means for the looming midterm elections.

"If this isn't passed, do you still believe the upcoming election will be fairly conducted and its results will be legitimate?" a reporter asked.

"Well it all depends on, uh, whether or not we're able to make the case to the American people that some of this is being set up to try to alter the outcome of the election," Biden responded.

REPORTER: "Do you still believe the upcoming election will be fairly conducted and the results will be legitimate?"

BIDEN: "It all depends depends on whether or not we're able to make the case to the American people that some of this is being set up to alter the outcome..." pic.twitter.com/COdhiTEYhh

Ah. The President of the United States says that whether or not he'll respect or trust the outcome of the midterm elections in which his party is expected to suffer significant losses just "depends" because someone might try to alter the outcome, but if his election power-grab passes, then there's no issue?

Given the Democrats' incessant blather about how the 2020 election was the most secure in history, one might have assumed that President Biden would immediately condemn such a dangerous question to democracy and declared that the outcome of the midterms would be accepted.

After all, it is something of a mortal sin to those on the left when someone questions the results or methodology of an election. Like most other things, that rule of course only applies to Republican doubts. Democrats have a track record of doubting GOP victories at the ballot box, one that began long before Donald Trump ever ran for office.

The president of the United States just said openly that if he doesn't get his absurd voting federalization bill, he won't guarantee that he respects election results. But don't worry, only Republicans are undermining faith in our elections.

It's dizzying to keep track of, but here's a rough outline of how election outcomes and legitimacy work out according to Democrats: Trump's win in 2016? Obviously Russia hacked our election. Biden's win in 2020? The most secure election in history. Midterm elections in 2022 predicted to be a bloodbath for Democrats? We'll see, but probably illegitimate if Biden doesn't get his way.

Biden refuses to say if the 2022 election will be legitimate. I guess it’s different when the left says it

Biden's uncertainty about whether or not he'll accept the midterms' results is a bit of a quiet-part-out-loud situation. Both the question about whether or not the midterms will be fair and legitimate and Biden's answer are laying the groundwork for Democrats to engage in rampant denial of election outcomes nationwide. The same thing for which Republicans are castigated endlessly.

It's pretty easy to imagine the Democrats' reaction if a Republican gave the same answer as Biden.

This is impeachable, no? https://t.co/C8cY1HaEWe