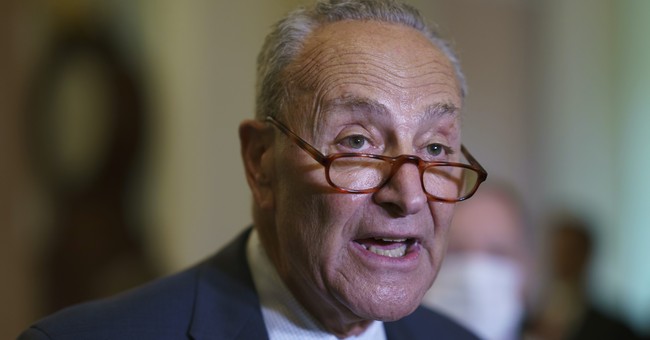 In another anecdote proving that the only standards Democrats have are double-standards, it turns out Chuck Schumer was for protecting the filibuster before he suggested it would be yet another casualty of Joe Biden and the Democrats' agenda to remake America to fit their warped vision for the future.

As Rebecca covered Monday, “In the New Year, Democrats are upping their ruthlessness to get what they want” as “Democrats have been trying to pass voting legislation that would amount to a federal takeover of elections but have been able to get any Republican support to overcome the filibuster.”

NEWS: Very, very interesting letter from @SenSchumer. He is leaning into changing the Senate rules MUCH more than before. this is as far as Schumer has gone.

He says they will consider a rules change by Jan. 17. pic.twitter.com/WImiqXcYbo

If Democrat attempts at a federal takeover of elections that would eliminate and prohibit several popular common-sense election security policies isn’t gaining support in the Senate, it’s probably because it’s a shortsighted partisan power grab the likes of which the U.S. Senate was set up to prevent.

Undeterred by norms, Schumer sent a “Dear Colleague” letter on January 3 threatening to pursue action to slice away at the filibuster:

Given the urgency of the situation and imminence of the votes, we as Senate Democrats must urge the public in a variety of different ways to impress upon their Senators the importance of acting and reforming the Senate rules, if that becomes a perquisite for action to save our democracy.

But “reforming the Senate rules” is something of which Schumer has not always been fond. Back in 2005, Schumer sang a very different tune because it was his party that was then in the minority and which benefited from the filibuster.

So, the thing Schumer says is now threatening American democracy itself — the filibuster — is something he said must be protected when he and his party were the ones who needed it to slow Republican action. To eliminate the filibuster, Schumer insisted, would “be a doomsday for Democracy.”

In 2005, Democrat Chuck Schumer said eliminating the filibuster would “be a doomsday for Democracy.” pic.twitter.com/SInO8p9bSd

Then there was Schumer's other point on another use of the filibuster, something he seemed to believe quite strongly in as a litmus test for President Trump's nominees. Apparently back in 2017, Schumer thought a lack of bipartisan support — one that prevented a filibuster from being overcome — meant that there was something wrong with who was being considered, and not the filibuster itself.

Sen. Schumer on Gorsuch nominee: "When a nominee doesn't get 60 votes, you shouldn't change the rules -- you should change the nominee." pic.twitter.com/1QmmZZSkcT

The only thing that changed for Schumer from his earlier statements in years past to his letter this week is that he went from being in the minority and depending on the filibuster to prevent Republicans from pushing legislation without bipartisan support to trying to do exactly that now that he’s the Majority Leader.

It's a classic Washington flip-flop, but if Schumer is going to press ahead with his attempt to bust norms — something he and his Democrat colleagues insist the GOP does — he should be made to justify his hypocrisy. As much as it may pain one to admit, Schumer was right in 2005 and 2017: casting aside the filibuster would be bad news for America. It was as true then as it is now.