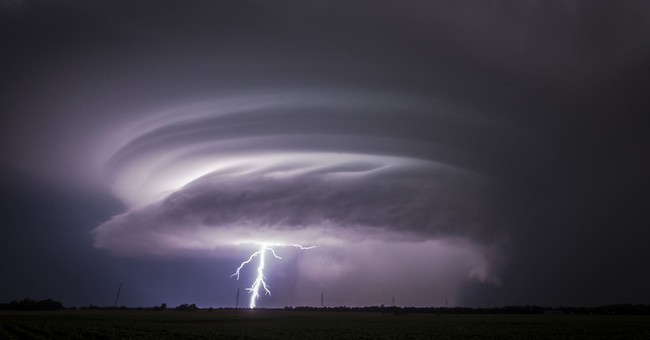 In the wake of a devastating and deadly tornado outbreak in Kentucky and a handful of other states, Democrats and mainstream media figures have returned to their old trick of standing atop life-altering tragedy to advance their partisan political agenda.

As Rebecca reported, President Biden was asked about the storms and — despite admitting he couldn't give "a quantitative read" on what role climate change may have played — said "the fact is that we all know everything is more intense when the climate is warming — everything. And, obviously, it has some impact here," he added. Except it's not obvious and it's not a settled fact.

As an Associated Press report explained, "Attributing a specific storm like Friday's to the effects of climate change remains very challenging" because "Less than 10% of severe thunderstorms produce tornadoes, which makes drawing conclusions about climate change and the processes leading up to them tricky," according to the National Severe Storms Laboratory's Harold Brooks.

USA Today also published an op-ed on the topic of whether the recent outbreak of tornadoes qualifies as "unprecedented" or a new development due that's attributable to climate change: "Historically, tornado outbreaks have occurred on nearly every day of the year – if the conditions are right, any day can produce devastating tornadoes," USA Today's report says. "We know that long-track tornadoes have occurred in the past with path lengths exceeding 100 miles," it adds. As for whether climate change played a role, USA Today is blunt in its denial that such a conclusion can be easily surmised:

Event-based attribution for climate change is still in development, particularly for tornadoes that need fine scales to model. Given the historical precedent, it would be misleading to definitively state a relationship to climate change without further assessment.

Also chiming in: The New York Post Editorial Board with a piece warning against "pseudo-scientific hype" concluding that tornado outbreaks are tied to climate change. "The fact is that tornados are not becoming more frequent; the average remains about 1,200 observed each year, ranging from 900 to 1,600 or so," writes The New York Post. "Warming might change when 'tornado season' hits, but no scientific studies have yet shown any such link."

Steve Milloy brought receipts in a Twitter thread to make a similar point: while tragic, this weekend's tornado outbreak is not unprecedented, nor is there a definitive or provable link between climate change or global warming and tornado frequency.

Was that 'climate change', too? https://t.co/oKZoVFl64d

What's more, available data suggests that there hasn't been an uptick in the frequency of tornadoes in recent years, nor has an increase in greenhouse gas emissions made tornadoes worse, at least according to the data Milloy included in his thread.

The data and expert insight shows that the science of climate change's impact on tornadic activity is far from settled. But don't hold your breath hoping Democrats and liberal media will stop using the death and destruction across the South to advocate for more government-expanding Green New Deal policies.