Joe Biden to Reporters on Climate Change and Tornadoes: 'Obviously [Warming] Has Some Impact Here' 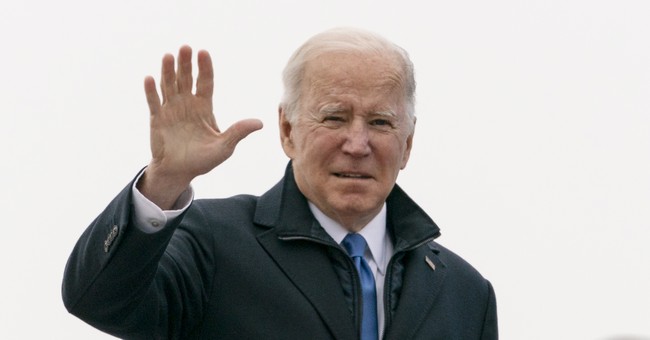 As President Joe Biden spoke from Delaware about the devastation of tornadoes impacting several states across the country, he was predictably asked about any connection climate change may have with the storms. A reporter had asked "does this say anything to you about climate change?  Is this — or do you conclude that these storms and the intensity has to do with climate change?" While the president accurately acknowledged that "the specific impact on these specific storms, I can't say at this point," he also still couldn't help himself from inserting his views warning about effects of climate change.

"I’m going to be asking the EPA and others to take a look at that.  But the fact is that we all know everything is more intense when the climate is warming — everything.  And, obviously, it has some impact here, but I can’t give you a — a quantitative read on that," the president continued.

The president was right to acknowledge that he couldn't say when it came to the "specific impact on these specific storms," which made his claim that "obviously, it has some impact here," all the more noteworthy.

Several sources back up the "I can't say" point.

A July 19, 2021 post for Yales Climate Connections by Bob Henson explains that, with original emphasis:

On the flip side, this clumping of an annual tornado crop that’s not significantly growing or shrinking has left an increasing number of days free of any tornadoes of EF1+ strength.

As with monthly and annual variability, no scientific studies have shown a link between the increase in daily-scale variability and climate change, and there is no certainty it will continue into future decades. The concept does bear some similarity to the observed trend – strongly connected to climate change, and expected to continue – of a larger share of U.S. rainfall falling in more intense episodes, though the two phenomena have not been explicitly studied together.

While it's worth noting that this piece is two and a half years old, from May 31, 2019, Zeke Hausfather does make some key points in a post for Carbon Brief:

The US has recently experienced one of its worst tornado outbreaks of the past decade, with more than 500 reported over 30 days. The number so far this year is also more than 200 above average.

This has raised the question of what role, if any, climate change may have played in this unusually intensive period of tornadoes. While some have suggested that climate change is driving the above-average numbers, the scientific community has pushed back on these claims.

Scientists have relatively low confidence in detecting a link between tornado activity and climate change. They cannot exclude the possibility of a link; rather, the science is so uncertain that they simply do not know at this point.

What is clear is that there is no observable increase in the number of strong tornadoes in the US over the past few decades. At the same time, tornadoes have become more clustered, with outbreaks of multiple tornadoes becoming more common even as the overall number has remained unchanged. There is also evidence that tornado “power” has been increasing in recent years.

Some research has suggested that climate change will create conditions more favourable to the formation of severe thunderstorms and tornadoes, but such effects are not detectable in observations today.

A post from the Center for Climate and Energy Solutions (C2ES) explains:

The link between tornadoes and climate change is currently unclear. Current data on tornadoes is inconsistent because measuring the presence of tornadoes relies on eyewitness accounts and aftermath damage assessments rather than quantifiable data. Additionally, it is difficult to identify long-term trends in tornado records, which only date back to the 1950s in the U.S., because the population in many areas affected by tornadoes has grown, contributing to increased eyewitness reports and greater property in harm’s way. Improved technology, such as advanced radar, also helps us “see” tornadoes that may not have been detected decades ago.

There has been coverage on the climate change question as it applies to these specific storms. In an "EXPLAINER: Was tornado outbreak related to climate change?," Suman Naishadham and Seth Borenstein wrote that "whether climate change is a factor is not quite as clear, meteorologists say."

HOW RELATED IS CLIMATE CHANGE TO TORNADO OUTBREAKS?

It’s complicated. Scientists are still trying to sort out the many conflicting factors about whether human-caused climate change is making tornadoes more common — or even more intense. About 1,200 twisters hit the U.S. each year — though that figure can vary — according to the NOAA National Severe Storms Laboratory. No other country sees as many.

Attributing a specific storm like Friday’s to the effects of climate change remains very challenging. Less than 10% of severe thunderstorms produce tornadoes, which makes drawing conclusions about climate change and the processes leading up to them tricky, said Harold Brooks, a tornado scientist at the National Severe Storms Laboratory.

Scientists have observed changes taking place to the basic ingredients of a thunderstorm, however, as the planet warms. Gensini says in the aggregate, extreme storms are “becoming more common because we have a lot warmer air masses in the cool season that can support these types of severe weather outbreaks.”

Unfortunately, there were far more worse and politicized reactions than Biden's.

We should do all we can to help our Kentucky neighbors. God be with them — they are hurting. But do not for one second forget that @RandPaul has voted against helping most Americans most times they’re in need. https://t.co/JkZQOZ4HuG

Rep. Eric Swalwell (D-CA) retweeted Sen. Rand Paul (R-KY) to express appropriate condolences to the loss of life and property. There was a pretty big "but" in there, though, as the congressman also made his tweet about attacking a Kentucky senator's voting record.

As of early Sunday morning, "Rand Paul" was still trending, with the description given being that "Senator Rand Paul’s previous opposition to Hurricane Sandy relief aid is discussed after he expressed his support for Kentucky Governor Andy Beshear’s request for federal assistance following a string of deadly tornadoes[.]"

Such beyond the pale remarks definitely went noticed by our friends over at Twitchy.