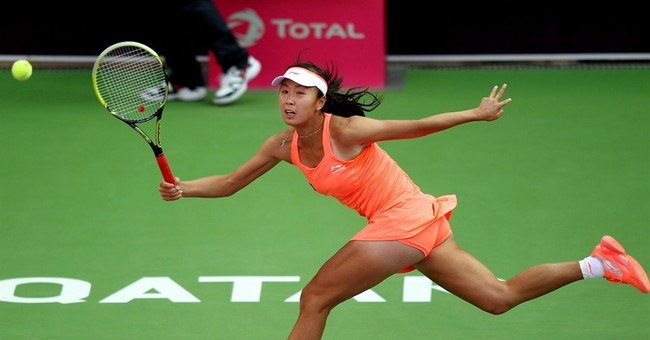 After the Chinese Communist Party refused to stop censoring tennis player Peng Shuai or investigate her allegations against a top CCP official — as Townhall previously covered here — the Women's Tennis Association followed through on its threat to suspend future events in China.

In a statement released by WTA Chairman and CEO Steve Simon, he explains what the CCP has done to silence or censor Shuai:

Peng’s message has been removed from the internet and discussion of this serious issue has been censored in China. Chinese officials have been provided the opportunity to cease this censorship, verifiably prove that Peng is free and able to speak without interference or intimidation, and investigate the allegation of sexual assault in a full, fair and transparent manner.  Unfortunately, the leadership in China has not addressed this very serious issue in any credible way.

And even though, as Simon explains, "we now know where Peng is, I have serious doubts that she is free, safe and not subject to censorship, coercion and intimidation."

Because China's communist government has not met the demands issued by the Women's Tennis Association and others in the tennis community, Simon announced that "with the full support of the WTA Board of Directors, I am announcing the immediate suspension of all WTA tournaments in China, including Hong Kong."

"With the full support of the WTA Board of Directors, I am announcing the immediate suspension of all WTA tournaments in China, including Hong Kong."

"In good conscience, I don’t see how I can ask our athletes to compete there when Peng Shuai is not allowed to communicate freely and has seemingly been pressured to contradict her allegation of sexual assault," Simon explained before alluding to other seemingly larger concerns with the Chinese Communist Party's lack of freedom and horrific human rights record: "Given the current state of affairs, I am also greatly concerned about the risks that all of our players and staff could face if we were to hold events in China in 2022."

Wow, what a statement. While Disney+ cuts a Simpsons episode for referencing Tiananmen, the WTA suspends tournaments in China and forcefully rejects censorship. Pay attention to how companies and organizations respond to these issues; it says a lot about their leaders’ values. https://t.co/KrxO9jHPEB

Many on Twitter applauded the WTA's decision to follow through on its threat to cease doing business with or in China regardless of the financial ramifications, but such a decision makes the WTA an outlier. Compared to the NBA, other sports leagues, and a litany of woke sports/entertainment companies that bowed to Chinese pressure to censor their activities here at home to avoid shining a light on China's wrongs, WTA is showing that a strong stance can in fact be taken.

The question now: Will anyone join them in holding China accountable for their actions?

@WTA suspends doing business in China. What other human rights, sports, cultural and political organizations will join and collaborate with WTA? It’s a tough road, but the correct one.