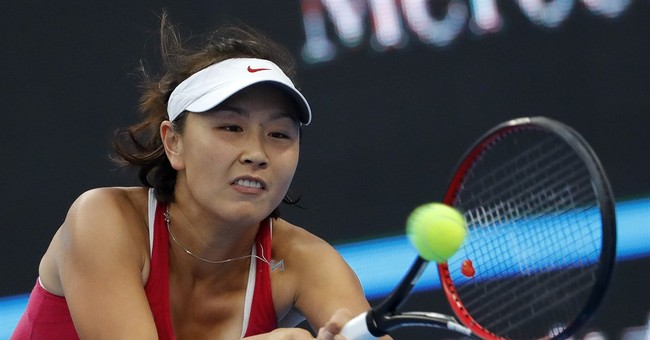 Professional Chinese tennis player Peng Shuai has not been seen or heard from since she alleged Zhang Gaoli, a former Vice Premier and senior Chinese Communist Party official, sexually assaulted her, save for one message that is now renewing concern for her safety and reigniting calls for her allegations to be investigated.

The message, reported by a Chinese state media outlet, was supposedly sent by Shuai to the Women’s Tennis Association (WTA) saying that she was fine and her allegations against the senior CCP official were false. It also called for the WTA to stop releasing statements or information without her approval. But Steve Simon, the Chairman and CEO of the WTA, isn't buying the propaganda.

A statement “from Peng Shuai” and carried by Chinese state media, saying “everything is fine”… where have we seen similar things before? pic.twitter.com/GvQA3fbCTI

In a statement released from WTA on Thursday, Simon said that the message reported by Chinese state media "only raises my concerns as to her safety and whereabouts" before explaining his skepticism:

I have a hard time believing that Peng Shuai actually wrote the email we received or believes what is being attributed to her. Peng Shuai displayed incredible courage in describing an allegation of sexual assault against a former top official in the Chinese government. The WTA and the rest of the world need independent and verifiable proof that she is safe. I have repeatedly tried to reach her via numerous forms of communication, to no avail.

Peng Shuai must be allowed to speak freely, without coercion or intimidation from any source. Her allegation of sexual assault must be respected, investigated with full transparency and without censorship.

The Chinese government, of course, has prevented any mention of Shuai's allegations on state media and continues to censor talk of her accusations or disappearance on social media within China in defiance of calls from the United Nations Human Rights office for China to provide "proof of her whereabouts and wellbeing" and urging "an investigation with full transparency into her allegations of sexual assault."

Unlike other professional athletic organizations — looking at you, NBA — Steve Simon and the Women's Tennis Association are threatening to pull out of China if Shuai isn't proven to be safe. "We're definitely willing to pull our business and deal with all the complications that come with it," Simon told CNN. "Because this is certainly, this is bigger than the business."

The tennis world has responded forcefully, sharing photos of Shuai and calling for an investigation.

I am devastated and shocked to hear about the news of my peer, Peng Shuai. I hope she is safe and found as soon as possible. This must be investigated and we must not stay silent. Sending love to her and her family during this incredibly difficult time. #whereispengshuai pic.twitter.com/GZG3zLTSC6

About 15% of all WTA events are held in China, including the WTA Finals.

It's a big part of their business.

So it's refreshing to see the WTA & its biggest names speak out for what is right, regardless of the consequences.#WhereIsPengShuai pic.twitter.com/Hmtfa0uhH3

We stand with the rest of the tennis community. @serenawilliams l #WhereisPengShuai pic.twitter.com/JEgUFdbmhD

The political world is taking note too, raising the alarm about China's treatment of Peng Shuai whose disappearance comes months before athletes from around the world are set to compete at the 2022 Winter Olympics in Beijing.

If the Chinese Communists disappear their own athletes, just think how much less they’ll care for the safety of ours during the Olympics. #WhereIsPengShuai https://t.co/tE4bHd2Yjw

Nor is a regime that commits genocide or dismantles promised freedoms

We must ask #WhereIsPengShuai?

And we must say: