Will Biden Apologize to Rittenhouse? Psaki Struggles to Answer. 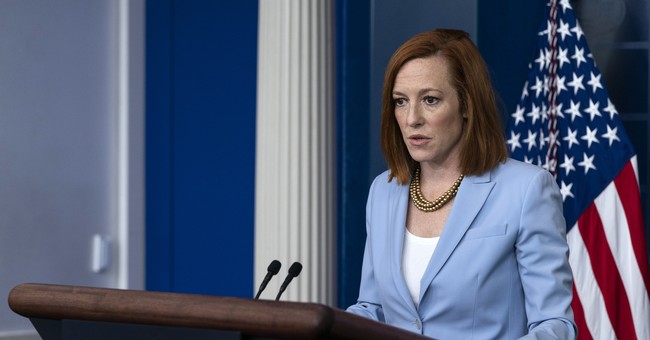 During Tuesday's White House press briefing, Jen Psaki struggled to come up with a coherent answer when asked whether President Biden would apologize for falsely smearing Kyle Rittenhouse as a white supremacist, both in a campaign ad and during an interview.

"Will the president ever apologize to the acquitted Kenosha shooter Kyle Rittenhouse for suggesting online and on TV that he is a white supremacist?" asked Peter Doocy.

"Well let's be clear what we're talking about here," Psaki responded, apparently trying to decide which direction to take her answer. "This is about a campaign video released last year," she began — choosing to not actually answer whether Biden would apologize or thought Rittenhouse deserved an apology — "that used President Trump's own words during a debate as he refused to condemn white supremacists and militia groups."

Ah, of course she'd invoke Trump, who is not the sitting president and who didn't smear Kyle Rittenhouse as a white supremacist. But, gaining steam in a direction away from the question Doocy asked, Psaki continued her line of attack saying "President Trump, as we know from history and as many of you covered, didn't just refuse to condemn militia groups on the debate stage, he actively encouraged them throughout his presidency," Psaki declared, despite the fact that Trump did in fact condemn white supremacists and likely did more in his four years of public service to uphold the rule of law and support law enforcement than Biden has done in more than four decades.

"So, you know, what we've seen are the tragic consequences of that when people think it's ok to take the law into their own hands instead of allowing law enforcement to do its job," she said. It's unclear whether that line was aimed at characterizing Rittenhouse's decision to defend himself as him taking the law into his own hands, but Psaki was too far gone.

DOOCY: "Will the president ever apologize to Kyle Rittenhouse for suggesting...that he is a white supremacist?"@PressSec deflects, claiming that President Trump "refused to condemn white supremacists and militia groups." pic.twitter.com/JrldQZSiXf

Doocy then asked again whether Biden would apologize and highlighted Biden's other false characterizations made about the now-acquitted Rittenhouse, but Psaki again refused to answer directly, yet didn't hesitate to seemingly attack Rittenhouse anew.

"The president spoke to the verdict last week," Psaki explained, although his immediate thoughts on the verdict and eventual full written statement were in conflict with each other.

"He has obviously condemned the hatred and division and violence we've seen around the country by groups like the Proud Boys," she said, apparently forgetting the names of Antifa and Black Lives Matter who carried out weeks of violence during the summer of 2020, including in Kenosha.

Psaki tried to land her answer by saying those aforementioned groups she says are full of hatred, division, and violence are "groups that that individual has posed in photos with," in a fresh attack on Rittenhouse — whose name she couldn't bring herself to utter — from the Biden White House. "Beyond that, I'll leave it to his comments around the verdict," Psaki concluded.

The verbal gymnastics Psaki had to execute from the White House podium are impressive, but shameful nonetheless. Biden made claims about Rittenhouse that were disproven at trial. Biden's furtherance of the false characterizations about Rittenhouse undoubtedly poured gas on the left's hatred toward the teenager. Biden never should have jumped to the convenient and mainstream media-favored narrative without the facts. But now that all the facts are out there, he ought to at least offer to make amends. Instead, Psaki avoided the question, attacked President Trump, renewed criticism of Kyle Rittenhouse, and rewrote the history of 2020 to pretend leftist violence and hatred never existed.

As Katie pointed out, President Biden personally called Jacob Blake, but the White House won't even acknowledge his false characterization of Rittenhouse nor offer an apology for the role he played in the pile-on that was based only in ignorance of the facts.

Biden made a phone call to criminal Jacob Blake, who had a warrant out for felony sexual assault at the time he was shot after resisting arrest with a knife, and yet no apology for Kyle Rittenhouse. Despicable. https://t.co/F3Z7isjpTB