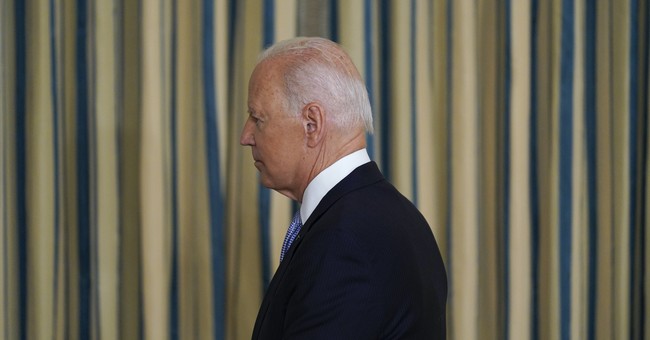 In remarks from the White House on Monday, an exasperated President Biden addressed the looming October 18 deadline before which Congress must vote to raise the nation's debt ceiling or face defaulting on its debts on the heels of last week's failure to whip enough support among congressional Democrats to move his domestic legislative agenda forward.

Failing to raise the debt ceiling is "reckless and dangerous" according to Biden who attempted to explain the situation in layman's terms. Such a vote, Biden claimed, is "paying what we already owe, what has already been acquired" and "not anything new."

"We're able to borrow because we always pay what we owe," Biden continued, saying "that's America, that's who we are." The "full faith and credit of the United States" is "rock solid, it's the best in the world," he added.

In Biden's pitch, "raising the debt limit is about paying off our old debts" and has "nothing to do" with his administration's infrastructure or budget reconciliation bills, two items the president erroneously claimed are "already paid for."

Voting to raise the debt ceiling is "usually a bipartisan undertaking" said a desperate Biden before launching into attacks on the previous Republican administration's "reckless tax and spending policies."

For the record, then-Senator Biden voted against raising the debt ceiling repeatedly as Senator Tom Cotton (R-AR) pointed out Monday.

Now, he wants *Republicans* to raise the debt ceiling to give him cover to waste trillions of dollars and make inflation worse.

Not a chance. The Democrats can do this themselves.

Again, despite claiming to be a unifying leader and a legislative deal "closer," Biden lambasted the opposition party as being "hypocritical, dangerous, and disgraceful."

"Republicans just have to let us do our job" and "get out of our way," the president said. "We're just asking them not to use procedural tricks," he said of Republicans who he accused of "playing Russian roulette with the American economy."

President Biden to Republicans on the debt limit:

“If you don’t wanna help save the country, get out of the way so you don’t destroy it.” pic.twitter.com/8Ff4sjxuAQ

Senate Republican Leader Mitch McConnell (R-KY) wrote in a letter to Biden on Monday that it's Democrats' duty to handle raising the debt limit, and noted that his caucus' position on the debt ceiling vote has been the same for months.

"Since mid-July, Republicans have clearly stated that Democrats will need to raise the debt limit on their own," McConnell explains. "All year, your party has chosen to pursue staggering "transformational" spending through unprecedented use of the party-line reconciliation process. Democrats inherited bipartisan trends from COVID relief to appropriations but have chosen to govern alone," McConnell noted. "Bipartisanship is not a light switch that Speaker Pelosi and Leader Schumer may flip on to borrow money and flip off to spend it."

My letter to President Biden this morning on congressional Democrats’ duty to handle the debt limit: pic.twitter.com/U3G9QMPJwY

"Mr. President, I have relayed this reality to your Democratic lieutenants for two and a half months," McConnell's letter continues. "My concern for our country is that Leader Schumer and Speaker Pelosi have done nothing. Either the Democratic leaders simply cannot govern or they would rather play chicken with the U.S. economy than accept reality."