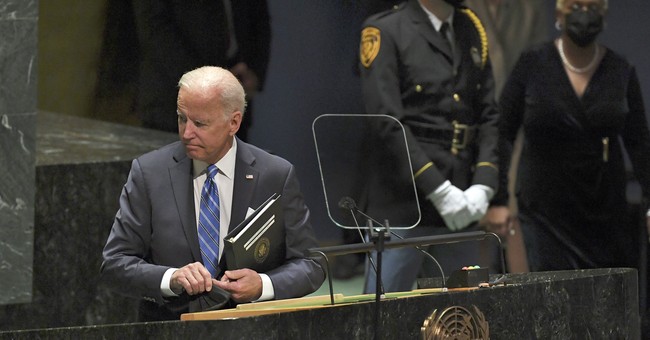 While Biden's strategy of hiding out in his Delaware basement may have helped him limp across the finish line in 2020, his frequent long weekends in Rehoboth Beach and refusal to answer questions while supposedly leading the free world is not doing his job approval numbers any favors.

The lack of leadership from Biden — especially amid a growing number of crises at home and around the world — has the man who once claimed to be the country's only hope to restore our nation's soul polling at all time lows according to the latest numbers released at the eight-month mark of Biden's presidency.

"Eight months after President Joe Biden's inauguration, his job approval rating has fallen six percentage points to 43%, the lowest of his presidency. For the first time, a majority, 53%, now disapproves of Biden's performance," explains Gallup.

As Biden scrambles to put together some semblance of an accomplishment to recover from crises in Afghanistan, along the U.S.-Mexico border, and among our long-time allies, attention is starting to drift to the upcoming midterm elections little more than one year away in which Democrats can't afford to lose seats in the House or Senate.

The 2022 election will be make-or-break for the Biden agenda as House Speaker Nancy Pelosi (D-CA) and Senate Majority Leader Chuck Schumer (D-NY) have slim majorities and can't afford to lose more than a handful of races, but Biden's performance so far has only driven independents away.

As Gallup's polling shows, Biden's lowest approval yet was driven by those independents that Democrats need to hold onto their congressional majorities. A 24-point drop — from 61 percent approval when he took office in January to 37 percent in September — is a troubling trend for Biden.

"Political independents, who were part of the coalition that helped him defeat Trump in 2020, now largely disapprove of the job he is doing as president," Gallup concluded. And the evaporating support is picking up speed, too: "two-thirds of Biden's slide among independents since he took office has occurred in the past three months."

“Biden's job approval rating has reached another low point in his presidency. The overall drop in approval is driven largely by political independents.”

?? that’s a 24-pt drop in approval since Jan among Indes pic.twitter.com/UOxTbGfW8Y

Vice President Kamala Harris is also underwater with independents, though not as much as her boss. The failed presidential candidate-turned-veep has — despite being saddled with some of Biden's failures including the border crisis, For the People Act, and police reform — higher job approval. "Her ratings are better than Biden's by six points," Gallup found, "with 49% approving and 49% disapproving."