FLASHBACK: Lyin' Joe Biden Promised Americans in Afghanistan He'd 'Get Them All Out' 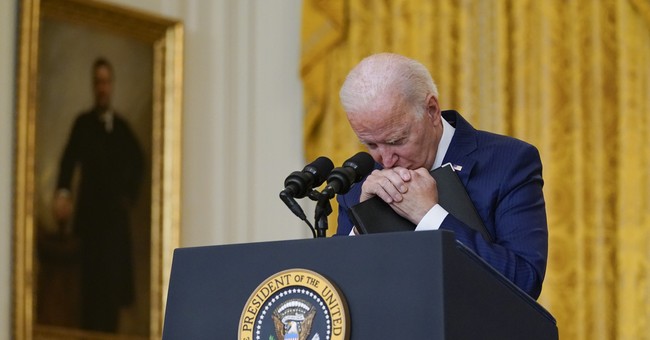 When the last American military airlift flight departed Kabul's Hamid Karzai International Airport, Joe Biden broke a promise he made to the American people — and the Americans stuck behind Taliban lines in Afghanistan — that he would bring them all home.

In his exclusive sit-down interview with ABC News' George Stephanopolous on August 18, Biden was asked whether he was "committed to making sure that the troops stay until every American who wants to be out is out?"

"Yes," was the President's reply. "If there's American citizens left, we're gonna stay to get them all out," Biden promised.

EXCLUSIVE: Pres. Biden tells @GStephanopoulos that U.S. troops will stay until all Americans are out of Afghanistan, even if past Aug 31 deadline. https://t.co/iEDJSzuSLI pic.twitter.com/mby6KHQ5ms

"Americans should understand that we're gonna try to get it done before Aug. 31st," he couched. "The commitment holds to get everyone out that, in fact, we can get out and everyone who should come out. And that's the objective. That's what we're doing now. That's the path we're on. And I think we'll get there."

President Biden and his administration didn't get there. 13 heroic U.S. service members were later killed in a suicide bombing near one of the Kabul airport's gates where individuals were being screened. Ultimately, Biden would leave Americans and Afghan allies behind when the airlift ended Monday afternoon.

At the time of the interview, Biden accepted the estimation that there were 10,000 to 15,000 American citizens in Afghanistan. As of Monday morning, the Pentagon reported evacuating just 5,400 Americans. Quick math suggests far more Americans remain in Afghanistan than the "low hundreds" number given Monday afternoon by CENTCOM Commander Kenneth McKinley.

The number remaining is less important than the fact that there are any Americans left behind in Afghanistan. President Biden committed to bringing every American home, even if it meant staying in Afghanistan beyond the August 31st deadline.