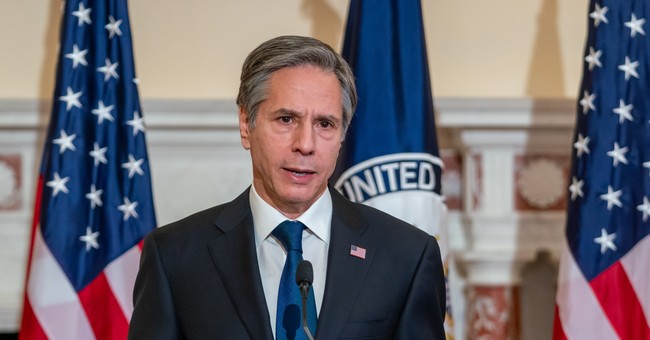 Joe Biden's ignominious withdrawal from Afghanistan is over — if you believe the last military aircraft departing Afghan airspace means it's over. But it's not.

Sure, the military's presence in Afghanistan is over, but Biden ended the military mission before the withdrawal was complete. There are still Americans — who President Biden had promised he'd bring home before withdrawing troops — and Afghan allies in the country without any clear means to evacuate.

Now there are no U.S. troops in Afghanistan and all we know is that there are at least "hundreds" of Americans — according to the Pentagon — left behind in a country run by Taliban terrorists and filled with ISIS-K and Al-Qaeda terrorists.

Speaking two hours later than scheduled on Monday, Secretary of State Antony Blinken offered little assurances for what would become of American citizens and the Afghans who risked their lives and futures to help the United States over the last two decades. Instead, he bragged about the State Department's "extraordinary efforts" to evacuate those who wished to leave.

The best Blinken could offer those left behind was a vague promise to "continue our relentless efforts" to help Americans and at-risk Afghans to "leave Afghanistan if they choose," albeit without a diplomatic presence in Afghanistan. Instead, any State Department operations will take place out of Doha, Qatar.

JUST IN: Sec. of State Antony Blinken announces that America's diplomatic operations have been transferred from Kabul to Doha, Qatar. https://t.co/UH8x9J4m4O pic.twitter.com/ZS63aqNYZS

The State Department was unable to help all Americans or our Afghan allies leave the country via diplomatic efforts while they were on the ground in Kabul, casting significant doubt on promises of future success at evacuating those groups while operating from another country and at the mercy of terrorists.

According to Blinken, fewer than 200 Americans remain in Afghanistan — but he said the State Department is still "trying to determine exactly how many” — while their fate apparently rests on the goodwill of the Taliban. The Biden administration, Blinken insisted, would "hold the Taliban to its pledge" to allow safe passage to those who wish to leave "in a safe and orderly manner."

Blinken talks about Americans left behind, adding he DOESN'T KNOW how many are left: "We made extraordinary efforts to give Americans every opportunity to depart the country...We believe there are still a small number of Americans...We're trying to determine exactly how many." pic.twitter.com/59G0NpPJCD

Blinken also suggested that the United States could trust the Taliban's promise that it would not allow Afghanistan to again become a safe haven for terrorists, ignoring the fact that the Taliban is, itself, a terrorist group.

Joe Biden's woeful Secretary of State Anthony Blinken says the Taliban has promised not to provide a safe haven to Islamist terrorist groups.

This may be news to Blinken, but the Taliban is actually an Islamist terrorist organization.

How perfect. Secretary of State Antony Blinken, after confirming hundreds of Americans have been left behind in Afghanistan, turns and walks away. No questions.

Joe Biden and his administration's commitment to bringing Americans home continues to be dubious, as it has been for days, only made worse by the fact that the last five U.S. military planes to depart Kabul had exactly zero Americans aboard. Biden's Pentagon and State Department have been unable to say how many Americans and Afghan special immigrant visa applicants remained on the ground up until the time the last plane was wheels up from Hamid Karzai International Airport.

Rather than addressing Americans Monday evening after the last plane departed Kabul, President Biden issued a statement bragging about those he was able to get out and pushing off any remarks to Tuesday afternoon.

"I have asked the Secretary of State to lead the continued coordination with our international partners to ensure safe passage for any Americans, Afghan partners, and foreign nationals who want to leave Afghanistan," Biden said, based solely on the goodwill of the Taliban to allow "freedom to travel."