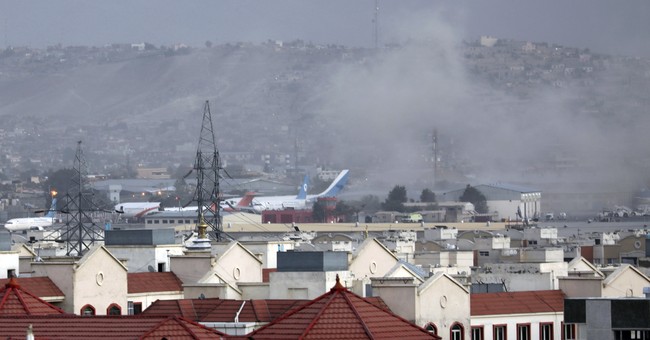 After initial reports that four Marines were killed in suicide bombings outside the Kabul airport Thursday, the death toll has increased to at least 11 United States service members.

I’ve been told by a reliable source connected to the ground in Kabul that at least 11 U.S. service members have been killed.

After the Pentagon confirmed that there were American casualties from the two suicide bombings that took place outside the Kabul airport Thursday, The Wall Street Journal is now reporting that four United States Marines are dead.

According to WSJ, "the U.S. ambassador in Kabul has told staff there that four U.S. Marines were killed in an explosion at the city’s airport and three wounded, a U.S. official with knowledge of the briefing said."

The Pentagon also confirmed that "a number of U.S. service members were killed in today's complex attack at Kabul airport."

Statement on this morning's attack at #HKIA: pic.twitter.com/Qb1DIAJQJU

The service members who were killed in Kabul today are the first American combat casualties in the country since February 2020 — making this loss yet more blood on Biden's hands amid his mismanaged withdrawal from Afghanistan.

Remember, there were zero combat casualties in Afghanistan from February 2020 until now. This is on Joe Biden, and no one else. https://t.co/id5uf7K6eS

In remarks delivered from the White House on August 20, President Biden was clear: "any attack on our forces or disruption of our operations at the airport will be met with a swift and forceful response."

"...any attack on our forces or disruption of our operations at the airport will be met with a swift and forceful response." Joe Biden, August 20, 2021. https://t.co/LSnpSmzglM

He also insisted that his administration was "keeping a close watch on any potential terrorist threat at or around the airport, including from the ISIS affiliates in Afghanistan."

As hours pass since the attack, no statement or briefing has been issued from the White House, and there has been no update to the White House schedule suggesting that President Biden will address the American people on Thursday's developments or the tragic loss of American service members.

Four U.S. Marines are dead. Bless their souls. Pray for their families.