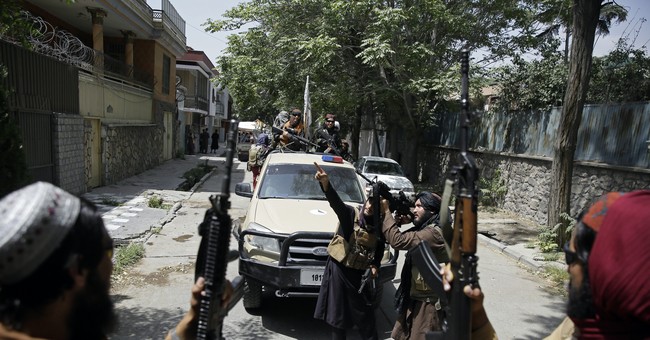 The Pentagon had little to say Tuesday about the news that the Biden administration had failed in its humiliating attempt to grovel before the Taliban in order to extend the August 31st deadline for withdrawal and instead doubled down on its plans to be out of the country by the deadline that is just one week away. That plan, now, has also been approved by President Biden.

Major General Hank Taylor reported that 21,600 individuals were evacuated in the last 24 hours at an increased pace of one departure every 45 minutes, but Taylor and Pentagon Press Secretary John Kirby repeated their earlier refusals to give an exact number — or even a percentage — of Americans who have already been evacuated from Afghanistan.

"There's been no change to the timeline of the mission which is to have this completed by the end of the month," Kirby said. "We are getting them out every day," he added of Americans seeking to evacuate Kabul.

"Several thousand Americans have been safely evacuated," Kirby said, repeating the quantifier he used in Monday's briefings. "That is as far as I'm going to be able to go today."

REPORTER: "Can this administration tell the American people how many Americans it has evacuated from Afghanistan? Why can't you just say the number?"

In addition to the question of how many Americans have been evacuated or who remain in Afghanistan, the Pentagon's insistence that they'd be out of the country by the end of August raise additional questions. Among them: How long will it take for the U.S. forces running the airlift from Kabul's Hamid Karzai International Airport to conclude operations and leave the country?

"I'm not going to get into a specific tick-tock here," Kirby said when asked when U.S. forces in Kabul would need to begin preparing for departure in order to meet the Taliban's August 31st deadline, adding it will take "at least several days" in order to get equipment and personnel "safely and effectively retrograded."

Recommended
Democrats Are in for a Backlash This November
Ronna McDaniel

While "several days" is another nonspecific answer, there are less than seven days remaining so presumably, U.S. forces in Kabul will need to begin drawing down soon, setting up a scenario in which Americans stranded in Afghanistan could watch as U.S. forces pack up and leave them behind.

Kirby explained that the "retrograde" of U.S. resources and personnel must be done "very carefully and sequenced in a very methodical way," even as President Biden's overall withdrawal from Afghanistan has been anything but careful or methodical and his decision to abide by the August 31st deadline amounts to the United States taking orders from the Taliban.

With just seven days left to finish the airlift and even fewer before American troops have to begin packing up, the Pentagon says there will be "no other additional operations" to bring Americans stranded behind Taliban lines in Kabul or elsewhere in Afghanistan to Kabul's airport.