'That's It, It's Over': Afghan President Flees Country 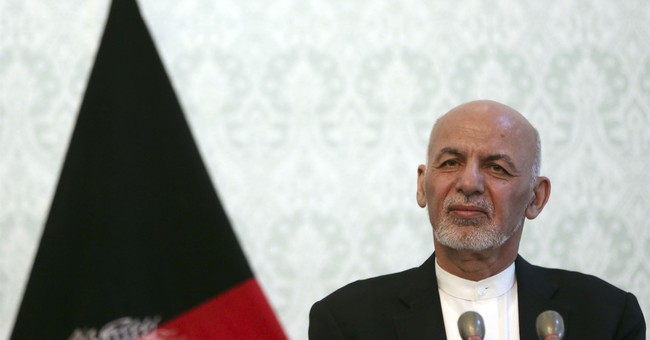 Those are the words attributed to a U.S. official as Afghanistan’s President Ashraf Ghani fled the country, reportedly for Tajikistan, Sunday.

President Ghani's departure as the Taliban entered Kabul overnight follows a number of other government officials who were spotted at Hamid Karzai International Airport in Kabul awaiting flights out of their country.

A source at the Hamid Karzai International Airport in Kabul tells CNN a number of high-ranking Afghan officials, including some of President Ashraf Ghani’s advisers, have arrived and are waiting for a flight out. It's not clear where they're going.

Ghani's decision to flee the country was followed by reports that the Taliban will move deeper into Kabul as fighters capture the Afghan capital, completing a mission that US intel predicted as recently as this week would take at least one month.

#UPDATE The Taliban were on the brink of total victory in #Afghanistan on Sunday, their fighters ordered to wait on the outskirts of the capital #Kabul and the country's interior minister conceding the government was preparing for a "transfer of power" https://t.co/neQxjo8bzB pic.twitter.com/XyFbYqKdhw

The Pentagon and State Department — along with President Biden himself — have insisted in recent weeks that Afghanistan might be able to prevent a Taliban takeover of Afghanistan.

Now, the Taliban say they will set up an interim government in Afghanistan for what they characterize as a “peaceful transition” of power despite reports of potential war crimes being perpetrated against surrendering Afghan security forces during the Taliban's bloody offensive.

In the wake of President Ghani's decision to flee Afghanistan, the U.S. Ambassador is reportedly exiting as well as armed Taliban fighters roam the streets of Kabul.

NEW: US AMBASSADOR HAS LEFT THE EMBASSY IN #KABUL. He and the flag are at the airport, per @CBSNews.

The Taliban entered Afghanistan's capital Kabul, an interior ministry official said, as the U.S. evacuated diplomats from its embassy by helicopter. Earlier, the insurgents captured the city of Jalalabad without a fight https://t.co/CkbOEYDLXF pic.twitter.com/8NCFc1sY7W

Saw dozens of Taliban on streets of kabul, some in new Afghan security vehicles. I suspect over the next several hours/overnight many many more will be coming.

The fate of the U.S. Embassy is soon to be in the Taliban's hands as they complete their takeover. As Katie reported, "many analysts believe it will be burned down on the 20th anniversary of the 9/11 attacks."

Recommended
Will Biden Get Bailed Out On, 'She Was 12, & I Was 30?'
Kevin McCullough
Trending Townhall Video
Share this on Facebook
Tweet
Face It Newsom, You'll Never Be DeSantis
Sarah Arnold
Pollster Suggests GOP Support Could Again Be Understated In Polls. Here's Why
Scott Morefield