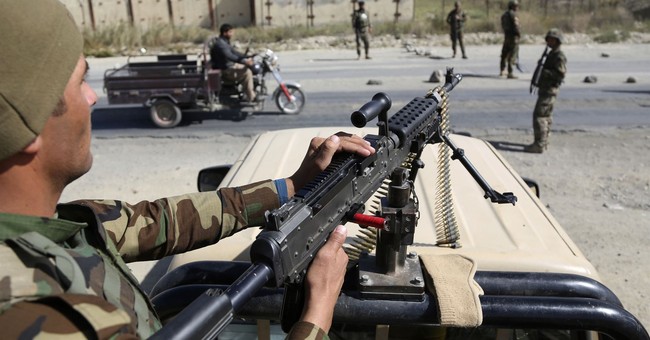 In Wednesday's news conference at the Pentagon, Press Secretary John Kirby announced at the outset that he was "not going to talk specifically about intelligence assessments one way or another" the day a new report suggested the Taliban's takeover of Afghanistan may see Kabul fall within three months.

Some intelligence officials thought Kabul could fall within six months. The U.S. military now thinks it could be half that, i.e. by the end of November, according to one official speaking to WaPo. https://t.co/TdGtCVVGgS

Admitting that the situation on the ground in Afghanistan "is deteriorating," Kirby said U.S. forces are "focused on the security situation that we face now" and "supporting Afghans in the field" but that "the recipe can't be just a constant U.S. presence in Afghanistan that never ends."

"We have seen them fight and contest areas," Kirby said of Afghan security forces, adding "no potential outcome has to be inevitable, including the fall of Kabul. It doesn't have to be that way."

While the Pentagon resists the looming fall of Afghanistan's government as certain, Kirby admits the Taliban's progress:

"What we're seeing on the ground is that the Taliban continues to advance and assume control of district and provincial centers that clearly indicate that they believe it is possible to gain governance through force, through brutality, through violence, through oppression."

When asked why the Taliban is rapidly succeeding in its campaign, Kirby dodged, saying "I don't have an assessment of Taliban resources" and "that's really not a question that we're prepared to answer here at the Pentagon." He did admit that Taliban takeovers of border crossings, highways, and communications stations have helped them gain revenue.

"They have advantages the Taliban doesn't," Kirby insisted of Afghan troops that have repeatedly been routed by Taliban fighters, outlining their greater numbers, air force, modern weaponry, organizational ability, and 20 years of training in the field by U.S. and allied forces.

"They have the advantages" over the #Taliban he says, adding it is about the will to use them

If these seemingly significant advantages exist, they don't seem to be helping Afghan forces beat back Taliban advances, a reality Kirby suggested lies with Afghans' will and political and military leadership. "What matters is today and where we are now," he said, adding "It really is going to come down to leadership" on the part of the Afghan military and government.

If they have all the advantages, why are they losing — the obvious question — was asked, but Kirby again ducked the supposition saying he "can't speak for Afghan strategy or tactics in the field" even as American airstrikes continue to support the Afghan military. But even that help from above the battlefield will end in August unless something changes.

Pentagon press secretary: ‘No policy decision’ has been made about continuing U.S. airstrikes in Afghanistan after Aug. 31

Amid the Taliban's violent offensive, Kirby said the Pentagon's "focus is completing the drawdown" while protecting any remaining diplomatic or other American personnel, apparently not what the intelligence community sees as an all but inevitable fall of Kabul.

When asked whether the Pentagon bears any responsibility for Afghanistan's apparent inability to ward off the Taliban despite numerous advantages, Kirby took "exception to the notion."

"These issues of leadership are issues that Afghan leaders, both military and political" need to step up and take ownership over.

"Nobody's passing any bucks here," Kirby insisted. "We have worked hard to improve Afghan competency" which at some point has to be owned by the Afghans themselves, he explained. "This is that point."

In July, when intelligence reports at the time predicted Afghanistan could fall within six months of the U.S. withdrawal, President Biden dismissed the idea. "You have the Afghan troops at 300,000 well-equipped, as well equipped as any army in the world, and an air force against something like 75,000 Taliban."