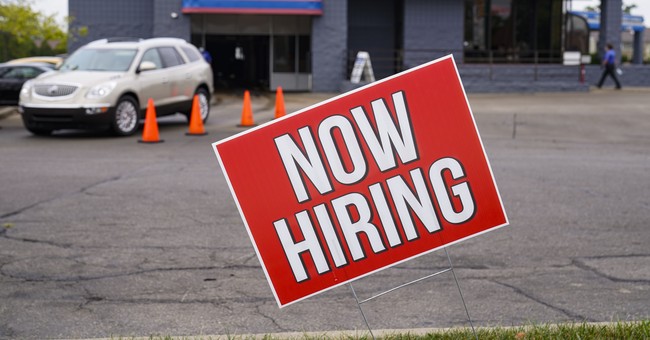 New employment numbers reveal which states are seeing unemployment rates bounce back fastest as Americans continue to recover from the Wuhan coronavirus pandemic as well as those that are still struggling to get residents back to work, and there's a common denominator in those doing poorly: expanded unemployment benefits and Democrat leadership.

The number crunchers at WalletHub took newly-released data and looked at five key metrics from all 50 states plus the District of Columbia to compare unemployment rate data from June 2021 with key dates in 2019 and 2020 to complete its ranking of states' economic recovery.

Bolstering conservatives' argument that the Biden administration's extension of employment benefits is harming America's economic recovery, all of the ten states seeing the slowest rebound still have expanded unemployment benefits available to residents.

Hawaii was 51st in WalletHub's ranking with 7.7 percent unemployment, with Nevada, Connecticut, New Mexico, New York, California, New Jersey, Louisiana, Illinois, and the District of Columbia rounding out the bottom ten for unemployment recovery. All are led by Democrat governors (or in DC's case, a Democrat mayor). Louisiana in June became the first state with a Democrat governor to announce he would end supplemental unemployment benefits, effective July 31.

The states with the best recovery in terms of employment are led by Nebraska in the number one spot with 2.5 percent unemployment, followed by Utah, Idaho, South Dakota, Alabama, New Hampshire, Vermont, Montana, Kansas, and Oklahoma. Nine of the top ten states are led by Republicans, a fact the Republican Governors Association heralded Thursday.

RGA communications director Jesse Hunt slammed "Biden’s disastrous economic policies and the Democrat governors going along with them," and noted that “as Republican governors continue to challenge Biden’s overreaching federal policies, defend American freedoms, and foster a business-friendly environment, their states are the best states to earn a living and pursue the American Dream.”