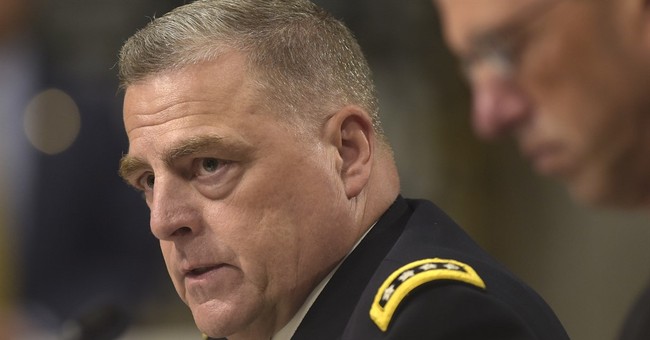 General Mark Milley, Chairman of the Joint Chiefs of Staff, explained in a House Armed Services Committee hearing Wednesday why he supports bringing Critical Race Theory into the American military while admitting "I'll obviously have to get much smarter on whatever the theory is."

"I do think it's important, actually, for those of us in uniform to be open-minded and be widely read," Milley said. "And the United States Military Academy is a university, and it is important that we train and we understand," he added as a rationale for teaching Critical Race Theory.

Understanding Critical Race Theory, according to Milley, is important to find out "what is it that caused thousands of people to assault this building and try to overturn the Constitution of the United States of America? I want to find that out," he said. "I want to maintain an open mind here and I do want to analyze it. It's important that we understand that. Because our soldiers, sailors, airman, marines, and guardians come from the American people, so it is important that the leaders, now and in the future, do understand it."

“On the issue of Critical Race Theory…I do think it’s important, actually, for those of us in uniform.”

Chairman of the Joint Chiefs General of Staff Mark Milley says he wants to understand “white rage” and CRT. pic.twitter.com/26l7mxqcgM

In defending the practice of including Critical Race Theory in military training, Milley noted "I've read Karl Marx, I've read Lenin, that doesn't make me a communist. So what is wrong with understanding, having some situational understanding about the country for which we are here to defend?"

Milley then criticized those who oppose the integration of Critical Race Theory, saying "I personally find it offensive that we are accusing the United States military, our general officers, our commissioned, non-commissioned officers of being 'woke' or something else because we're studying some theories that are out there."

As Katie reported earlier in June, Rep. Michael Waltz (R-FL) sent multiple letters to West Point in order to learn how Critical Race Theory was being implemented —not just studied or considered — and ring the alarm on CRT's damaging outcomes.

"On the battlefield, skin color doesn't matter. All that matters is merit & mission," Waltz tweeted about his inquiry. "Critical Race Theory’s antithetical to the unity needed for service to our country & that's why I'm getting to the bottom of why it's being taught to our future leaders at our military academies."

On the battlefield, skin color doesn't matter. All that matters is merit & mission.

Critical Race Theory’s antithetical to the unity needed for service to our country & that's why I'm getting to the bottom of why it's being taught to our future leaders at our military academies. https://t.co/JIbMXWjmBM