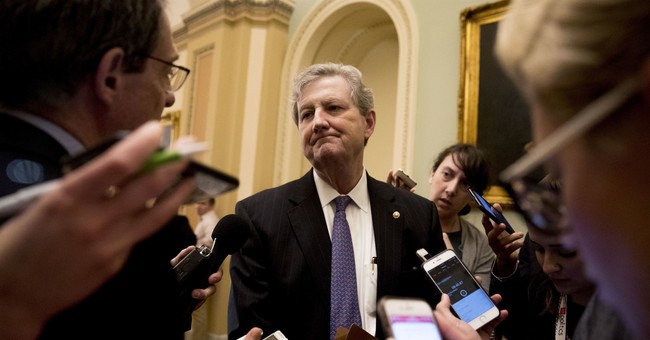 As fewer and fewer people take Dr. Anthony "I am science" Fauci seriously in the wake of an unceremonious release of his emails about the Wuhan coronavirus, Senator John Kennedy (R-LA) doesn't have much pity to offer.

"I know Dr. Fauci, I like Dr. Fauci, I respect Dr, Fauci. But Dr. Fauci needs to cut the crap. This isn't about Dr. Fauci, it's not about his feelings. I'm sorry if his feeling were hurt. You know maybe he ought to buy an emotional support pony," Kennedy remarked to Hannity.

Last night with @seanhannity, @SenJohnKennedy addressed Dr. Anthony Fauci having his feelings hurt by all the recent criticism:

"Maybe he ought to buy an emotional support pony." pic.twitter.com/t3Nnkn5gJi

Kennedy continued, explaining Fauci's track record of funding lab research on bat viruses in China with Taxpayer dollars. "Dr. Fauci gave a lot of U.S. taxpayer money to the Wuhan lab for Chinese scientists to research bat coronaviruses. Neither Dr. Fauci nor any of his people can guarantee us that the Chinese scientists didn't use that money to do gain of function research and turn a normal virus into a supercharged virus."

Fauci gave a lot of U.S. taxpayer money to the Wuhan lab to research bat coronaviruses, but his people didn’t monitor China’s lab.

Kennedy also made the important point that if—as Fauci and his fellow experts told us—the Wuhan coronavirus was a natural phenomenon, the Chinese Community Party would be "screaming it from the rooftop" to help their case that they were not responsible for unleashing a global pandemic.

If China could prove that the COVID-19 virus occurred naturally, would it withhold that evidence? No—China would be screaming it from the rooftop to get the world off its back.

As a follow-up Thursday afternoon, Kennedy took to his personal Twitter account to share a simple equation that sets the record straight on what kind of doctor Louisiana's junior senator prefers: