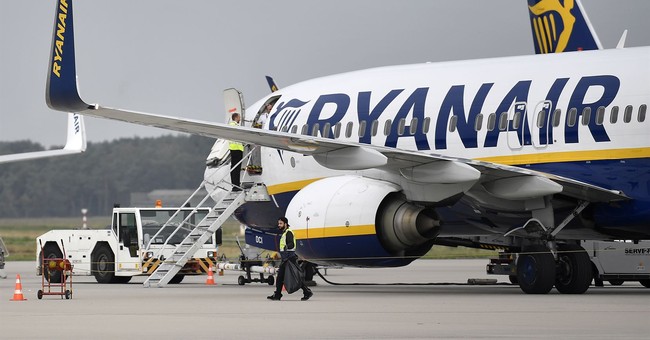 In reports Sunday morning that read like a Tom Clancy novel, it appears the tyrannical government of Belarus successfully nabbed Roman Protasevich, a dissident activist who exposed the violence carried out by Belarusian authorities. And while arresting dissidents is standard operating procedure for dictators, such arrests aren't usually carried out while the target is cruising though the arresting nation's airspace while traveling between two sovereign European Union countries on an Irish airline.

A Ryanair flight #FR4978 from Athens to Vilnius, diverted to Minsk in Belarus earlier today.https://t.co/rnUpiqOjch

According to reports in media a Belarus journalist, that was onboard the flight, was arrested after the diversion to Minsk. pic.twitter.com/MQyvXsDExM

Breaking news of arrest of Roman Protasevich, ex chief editor of @NEXTA_EN, a key organising influence in 2020 Belarus protests. The Athens-Vilnius Ryanair plane he was flying on was forced to land at Minsk Airport after a bomb threat.

Protasevich became a thorn in the side of Belarus' president when he shared with the world the extent of Lukashenko's brutal crackdown on civilians and journalists and helped protestors organize in the wake of a rigged election:

The corruption and grinding poverty produced by Belarusian leader Alexander Lukashenko and his regime's 26 years in power finally spurred a new reform-minded generation to challenge the dictator at the ballot box. Knowing they were despised, the dictator's gang rigged the election. Outraged by the fraud, reformers filled the streets with genuinely peaceful mass protests and appealed to free nations for help. Attempting to crush an energized opposition, the dictator's riot cops responded brutally, beating and arresting thousands.

According to the editor in chief of Protasevich's outlet, a bomb threat aboard the flight was created as pretext to force the Ryanair flight from Athens bound for Lithuania to land in Belarus, and a military jet was reportedly scrambled to lead the commercial plane to Minsk where no bomb was found and Protasevich was arrested.

insisting there’s an IED onboard. Eventually the crew was forced to send out SOS (literally moments before the plane would've left Belarus airspace). MiG-29 took off and escorted it to Minsk. Security services entered the plane and arrested Protasevich. (2/2)

Representative Peter Meijer (R-MI) called for "condemnation and stronger sanctions against Belarus" over the "egregious violation."

The authoritarian Belarusian regime just forced down a civilian Ryanair plane flying from Greece to Lithuania to arrest a political activist who criticized the dictator Lukashenko. This is an egregious violation that deserves condemnation and stronger sanctions against Belarus. https://t.co/QoydI7TPXM

We need an immediate explanation by the Government of #Belarus on the diversion of a Ryan Air flight within the EU to Minsk and the alleged detention of a journalist.

Passengers and crew of Ryanair flight en route from Athens to Vilnius have been put in danger - when forcibly landed in Minsk.

We demand that the plane and passengers be allowed to fly to Vilnius immediately!