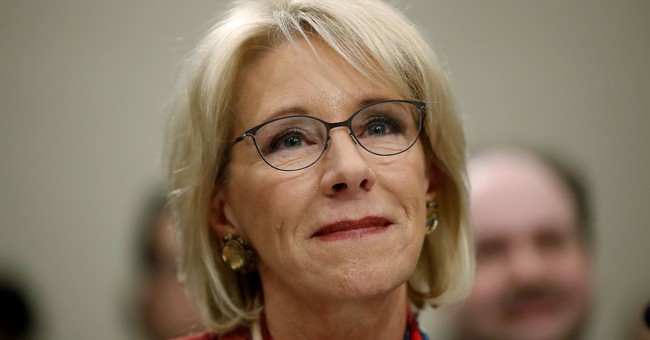 Former Secretary of Education Betsy DeVos joined The Story with Martha MacCallum Tuesday to sound off on extended school closures and respond to Monday's remarks by president of the American Federation of Teachers Randi Weingarten.

In a Monday interview with MacCallum, Weingarten tried to blame the Trump administration for months of extended school closures and distance learning in the name of COVID safety. DeVos responded on Tuesday, calling Weingarten's attempt to pass the buck "an outright lie," adding the Trump administration "knew last spring that it was safe for kids to be back in school."

DeVos didn't mince words when it came to evaluating the state of play for America's students through the beginning of the Biden administration:

"We have failed kids across this country. I worry for the future of the country when this is how we're treating the most valuable asset we have, our children, they're our future. It's just been heartbreaking to hear some of these stories, to see some of these things first hand. There is no excuse."

"There's been tremendous fear mongering on the part of the teachers unions and their allies," said DeVos of the those who've whipped people into a panic for months to convince local, state, and federal authorities they couldn't possibly return safely to in-person instruction. "The media has been very complicit in this as well," she added.

Kids were needlessly, and detrimentally, kept out of school "very simply because of politics," explained DeVos. "The unions saw an opportunity to impact the election, they saw an opportunity to have a money grab" and the union bosses "played hardball" in a way that was an "absolute travesty for kids."

"The reality is that the teachers unions have continued to play politics with kids' lives and their futures," said DeVos, warning that "we won't know for years what the long term impact of this has been."

As teachers and their unions continue to hedge bets and refuse to offer promises they'll return to in-person learning in the fall, DeVos blasted their unscientific reluctance:

"There is no excuse if they're not back 100%. The reality is that parents across the country, families across the country, are realizing what many have known for decades: that a monopolistic system—that is our K-12 system—is broken. It's failing too many kids, and parents are not going to stand for this long-term. Randi and the rest of her allies know this. They're treading a fine line."

As for any sort of silver lining to come from union bosses playing politics with the rising generation, DeVos pointed out that "parents have awakened to what's really going on in their kids' schools. They've been able to see what their remote learning was like, what they're actually learning or not learning." The former education secretary called for parents to "understand that they have power in this situation and they need to make their voices heard."

MacCallum also asked DeVos to respond to Weingarten's verbal gymnastics regarding the 1619 Project.

"Let's be really clear: the 1619 Project is not history. It suggests that the reason for the founding of our country was to perpetuate slavery. It denies 1776 and our Constitution and our founding documents and the goal of forming a more perfect Union.

.@marthamaccallum: "Do you believe 1619 is a factual program?"

AFT President @rweingarten dodges: "I'm a history teacher... 1619 was the year that the first slave boat came from Africa to the United States."

Whether it's union bosses playing politics or the 1619 Project being taught as truth in the classroom, DeVos again reminded that "parents have got to speak up and raise their voice."