'In America, No One Should Have to Work More Than One Job,' Says VP Harris in New Hampshire 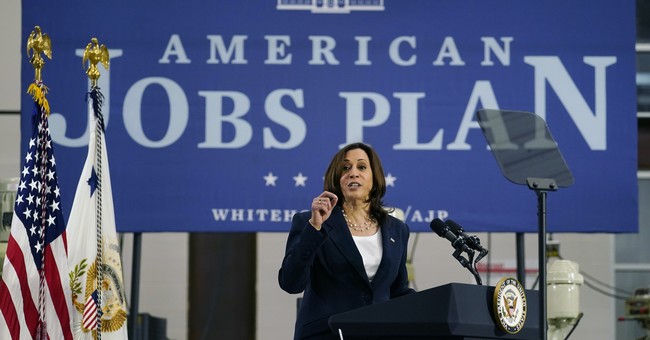 Vice President Kamala Harris visited New Hampshire on Friday to address union workers as the Biden Administration tries to rally support around its American Jobs Plan, a woke $2 trillion proposal disguised as an infrastructure package that's not really about infrastructure.

The Vice President began by emphasizing the importance of having a "good job," defined by Harris as "a job that allows you to earn enough to be able to keep a roof over your head and food on the table and also maybe take a vacation once a year."

Harris continued by invoking what she claimed is a "collective belief" that "in America, no one should have to work more than one job to be able to perform those basic functions, which is to take care of your family."

Turning her attention to the workforce development that is included in the American Jobs Plan, Vice President Harris called for America to stop talking about "higher education" and instead call it "education after high school."

For years, conservatives and anyone who's capable of completing a basic cost-benefit analysis have questioned whether the leftist inanity that has become the mainstay of university curriculum is worth tens or hundreds of thousands of dollars in debt. And so on this point, at face value at least, Harris is on to something.

We don't need more ecofeminism majors, we need more skilled workers. The problem, of course, is how Harris and the rest of the Biden Administration plans to implement this goal—by infusing the same leftist social justice principles students might have had a chance at avoiding by skipping a four-year liberal arts program. As Katie reported, the American Jobs Plan reads like an Ivy League syllabus:

In order to ensure workers have ready access to the skills they will need to succeed, and to improve racial and gender equity, President Biden is calling on Congress to invest $100 billion in proven workforce development programs targeted at underserved groups and getting our students on paths to careers before they graduate from high school.

So while the goal—having more American students trained to fill high-skill jobs rather than indoctrinated in once-prestigious institutions—is good, the method is just more leftist madness.

Trying to make a point about the need for gender equity, Vice President Harris closed her remarks with "just a little bit of trivia. Did y'all know that hard hats are actually unisex?"

The more you know. Maybe the next trip Harris takes to a border state will be one along the southern border.