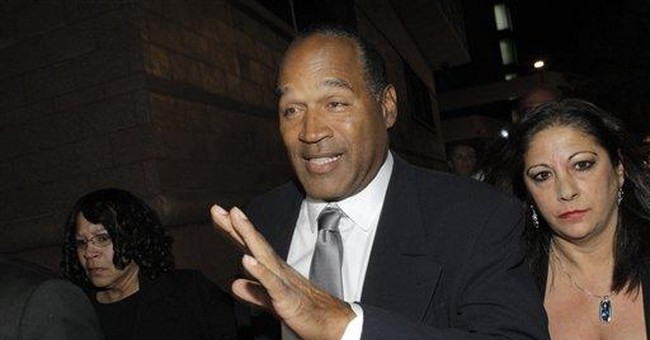 O.J. Simpson is back on Twitter with a new video tweeted Sunday night, this time grabbing the third rail of transgender athletes.

"I guess I'm against it," he says of transgender women competing in women's sports, especially in high school.

In competition, X is X and Y is Y pic.twitter.com/K4QSpZhDZU

The rambling video, according to Simpson, came about about after talking with his golf buddies. He admits he initially "didn't have much of an attitude about it," until someone mentioned Caitlyn Jenner, the olympian-turned-reality TV patriarch-turned-transgender activist.

"Somehow I just thought it was some sort of unfair," Simpson added.

He goes on to consider the flip side—transgender men competing against males—and reaches a relatable conclusion: "This whole thing is making my head hurt, I don't want to think about it."

Whether he wants to think about it or not, more and more are being forced to grapple with it.  A growing list of states including Tennessee, Arkansas, and Mississippi have taken legislative action to protect women's sports.

I signed the bill to preserve women's athletics and ensure fair competition. This legislation responds to damaging federal policies that stand in opposition to the years of progress made under Title IX and I commend members of the General Assembly for their bipartisan work.

Today Governor @AsaHutchinson of Arkansas signed #SB354 which effectively keeps biological males from participating in women's sports. Thanks for joining with Idaho and Mississippi to #SaveWomensSports! pic.twitter.com/N0wQZ3xBEo

In response, the NCAA recently announced that it would not allow its championships to be played in states that pass such measures.