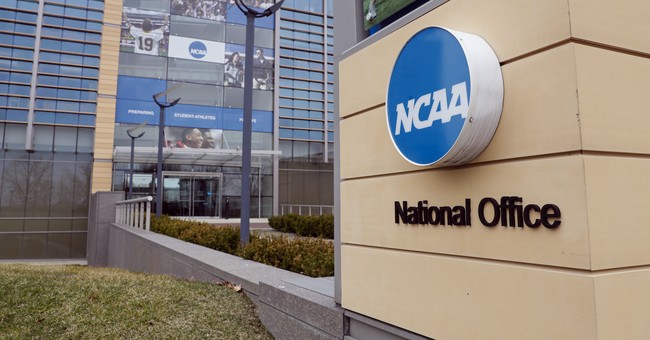 The NCAA announced Monday that it “unequivocally” supports transgender student-athletes and will no longer allow championship events to be held in states that protect female athletes. The Board of Governors cited its commitment to “values of inclusion and fair competition.”

“The NCAA has a long-standing policy that provides a more inclusive path for transgender participation in college sports,” the statement said. “Our approach — which requires testosterone suppression treatment for transgender women to compete in women’s sports — embraces the evolving science on this issue and is anchored in participation policies of both the International Olympic Committee and the U.S. Olympic and Paralympic Committee. Inclusion and fairness can coexist for all student-athletes, including transgender athletes, at all levels of sport. Our clear expectation as the Association’s top governing body is that all student-athletes will be treated with dignity and respect. We are committed to ensuring that NCAA championships are open for all who earn the right to compete in them.”

A recent study published in the British Journal of Sports Medicine, however, found that after a year on hormone therapy, trans women still had an athletic advantage over cisgender women.

The statement further noted that when determining where championships should be held, "only locations where hosts can commit to providing an environment that is safe, healthy and free of discrimination should be selected." In other words, states that have sought to protect women and girls, allowing them to compete on a level playing field, will be barred from hosting the events.

Today the NCAA confirmed it will pull events from states with bills banning biologically male student athletes from competing against female athletes in school sports. https://t.co/avp0nN0ouD

Update: Penny Nance, CEO and President of Concerned Women for America, blasted the NCAA in a statement.

“For over a decade, the NCAA has been driven by politics, not science or safety, in promoting transathletes in women’s sports. Once again, the NCAA Board of Governors has shown their disdain for female student-athletes treating them as second class and denying their rights for equality under Title IX. Throwing women and our female status under the bus (again) and threatening states who are doing the right thing only shows the incompetence and cowardice of the NCAA. The Board of Governors clearly has no regard for real fairness for female student-athletes, only woke politics. Further, this statement shows that the activism of the left leaves no middle ground. Young women deserve better than this.”